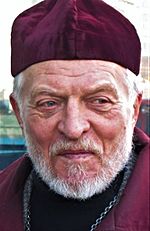 Gleb Pavlovich Yakunin (Russian: Глеб Па́влович Яку́нин; 4 March 1934 – 25 December 2014) was a Russian priest and dissident. He fought for the freedom of conscience in the Soviet Union. He was member of Moscow Helsinki Group, and he was elected to Russian Parliaments from 1990 to 1999.

Yakunin was born in Moscow, Soviet Union. He died at the age of 80 after a long illness on 25 December 2014 in Moscow, Russia.

All content from Kiddle encyclopedia articles (including the article images and facts) can be freely used under Attribution-ShareAlike license, unless stated otherwise. Cite this article:
Gleb Yakunin Facts for Kids. Kiddle Encyclopedia.