Glencoe is a rural locality in the Toowoomba Region, Queensland, Australia. In the 2016 census,Glencoe had a population of 322 people.

The area was once known as Gowrie Scrub. 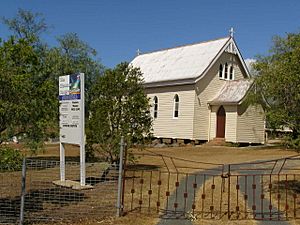 The Bethlehem Lutheran Church opened in 1880 and celebrated its 125th anniversary in 2005.

Two cemeteries are located adjacent to one another in Glencoe Road. One is associated with the neighbouring Lutheran Church; the other is a non-denominational cemetery operated by the Toowoomba Regional Council.

All content from Kiddle encyclopedia articles (including the article images and facts) can be freely used under Attribution-ShareAlike license, unless stated otherwise. Cite this article:
Glencoe, Queensland Facts for Kids. Kiddle Encyclopedia.