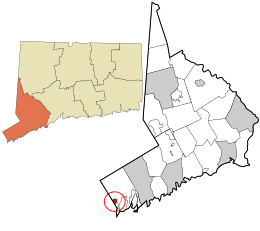 Location in Fairfield County and the state of Connecticut.

Glenville is a neighborhood and census-designated place in the town of Greenwich in Fairfield County, Connecticut, United States. As of the 2010 census, it had a population of 2,327. It is located in the western part of Greenwich at the falls of the Byram River, which provided waterpower when this was a mill village. The area is home to Glenville Elementary school, Western Civic Center and a volunteer fire station, the Glenville Fire Department.

The original settlement of Glenville, which was formerly known as "Sherwood's Bridge", was listed on the National Register of Historic Places in 2007 as the Glenville Historic District. The district covers 33.9 acres (13.7 ha) and is the "most comprehensive example of a New England mill village within the Town of Greenwich". It "is also historically significant as one of the town's major staging areas of immigrants, predominantly Irish in the 19th century and Polish in the 20th century" and remains "the primary settlement of Poles in the town". Further, "[t]he district is architecturally significant because it contains two elaborate examples of mill construction, designed in the Romanesque Revival and a transitional Stick-style/Queen Anne; an excellent example of a Georgian Revival school; and notable examples of domestic and commercial architecture, including a Queen Anne mansion and an Italianate store building."

All content from Kiddle encyclopedia articles (including the article images and facts) can be freely used under Attribution-ShareAlike license, unless stated otherwise. Cite this article:
Glenville (Greenwich) Facts for Kids. Kiddle Encyclopedia.