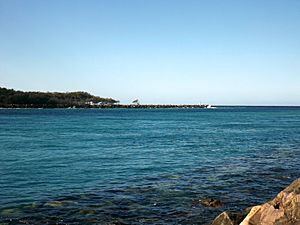 The Gold Coast Seaway or Southport Seaway is the main navigation entrance from the Pacific Ocean into the Gold Coast Broadwater and southern Moreton Bay and is one of Australia's most significant coastal engineering projects. It is located at the northern end of the Southport Spit where the Nerang River enters the Pacific Ocean. The channel was constructed between 1984 and 1986, primarily to facilitate the safe passage of sea-faring vessels. The passage was previously known as the Southport Bar. The mouth of the Nerang River was once located further south in Broadbeach. The main driving force for this movement is the northward drift of sand along the coast. This northward drift was responsible for the unstable and shifting conditions of the bar, which made crossing it so hazardous for small boats. The southern training wall of the Gold Coast Seaway is the northern end of the Gold Coast Oceanway.

Two rock walls to stabilise the position of the entrance were constructed. To reduce the entry of ocean swells the breakwater walls were aligned 15 degrees north of east and increasing the length of the southern wall. Models indicated that the western shores of the Broadwater would need further protection from waves. Wave Break Island was constructed from dredged material to act as a barrier. 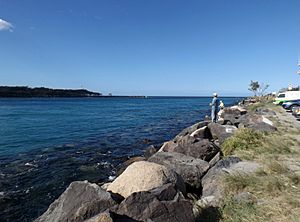 The channel is 250 metres wide. The mean depth is 11 m and it has a maximum depth of 20 m. During outgoing tides, excess treated wastewater from four sewage treatment plants is released into the channel.

Gold Coast Seaway enjoys the world's first permanent sand bypassing system, which currently delivers all sand that arrives at the Gold Coast Seaway across the entrance and into the Moreton Bay Marine Park. Up to 500 cubic metres of sand can be moved per hour. The Gold Coast Shoreline Management Plan is reviewing this practice and examining the concept of Island welding to determine if 85% of the sand (80,000 cubic metres per year) can be sustainably recycled to Surfers Paradise. This system works by pumping the sand through the jetty and delivers it away to clear the channel.

Promising a result of "no dingoes," Mayor Ron Clarke has proposed building a tunnel under the Seaway, which would link to South Stradbroke Island. His controversial proposal is based upon an end result of making Stradbroke into Australia's premiere eco-tourist destination.

All content from Kiddle encyclopedia articles (including the article images and facts) can be freely used under Attribution-ShareAlike license, unless stated otherwise. Cite this article:
Gold Coast Seaway Facts for Kids. Kiddle Encyclopedia.