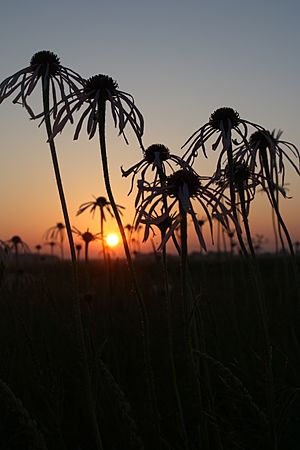 The rolling landscape of Golden Prairie developed from Mississippian sandstones, shales, and cherty limestone. It contains examples of dry-mesic sandstone prairie, chert prairie, hardpan prairie, and prairie swale. State-endangered species found at Golden Prairie include the prairie mole cricket, the regal fritillary butterfly, and the Arkansas darter. The federally-endangered prairie chicken, formerly common on the prairie, has not been observed for several years. Other grassland birds found at Golden Prairie include dickcissels, eastern meadowlarks, grasshopper sparrows, and Henslow's sparrows.

Among the over 340 vascular plants at the site are the characteristic tallgrass prairie plant species big bluestem and prairie dropseed, but rarer plants such as royal catchfly (Silene regia) can also be found.

Utilized for hay since European settlers first arrived, prairie restoration at Golden Prairie began in the early 1970s after it was purchased by the Missouri Prairie Foundation. This has included the use of controlled burns to stimulate native prairie vegetation, the removal of trees, and the control of invasive exotic plants.

All content from Kiddle encyclopedia articles (including the article images and facts) can be freely used under Attribution-ShareAlike license, unless stated otherwise. Cite this article:
Golden Prairie Facts for Kids. Kiddle Encyclopedia.