Goliath is a steel roller coaster located at Six Flags Magic Mountain amusement park in Valencia, California. Manufactured by Giovanola of Switzerland, the hypercoaster is located in the Goliath Plaza section of the park and opened to the public on February 11, 2000. Its sub-tropical theme is characterized by ancient ruins of the Mayan civilization. The ride is nearly identical to Titan at Six Flags Over Texas, but it lacks a 540-degree upward helix prior to the mid-course brake run and features a slightly shorter track layout.

For a brief period, Goliath was widely recognized for having the longest drop at 255 feet (78 m) and the fastest speed of 85 mph (137 km/h) among all closed-circuit roller coasters in the world. Millennium Force at Cedar Point eclipsed both records several months later when it debuted on May 13, 2000, with a drop of 300 feet (91 m) and a maximum speed of 93 mph (150 km/h).

On January 29, 1999, Giovanola roller coaster track arrived at Six Flags Magic Mountain. It was then confirmed that the new attraction would be a hypercoaster.

On November 11, 1999, Six Flags Magic Mountain announced that the new coaster would be named Goliath. The ride officially opened on February 11, 2000.

In November 2013, seat belts were added to Goliath and Full Throttle.

Leaving the station, the train makes a nearly 180 degree right turn. The train then ascends the chain lift hill, reaching a height of 235 ft (72 m). Ascent slows toward the top of the chain lift hill, a safety feature that reduces stress on the chain; it is also an attempt to reduce positive g-forces and increases rider anticipation. The train begins accelerating down the initial 255 ft (78 m) drop, into an underground tunnel, reaching a speed of 85 miles per hour (137 km/h). Upon exiting the tunnel, the train heads upwards into a banked right turn that towers above Twisted Colossus. After completing the turn, the train heads down another drop, flattening out to pass by the onride camera. An airtime hill and banked left turn (rather than a helix on "Titan") follows into the mid-course brake run. The train is decelerated quickly and makes a hard left turn out of the brake section. Another 180 degree banked turn directs the train into a 585 degree, descending helix. Then, the track turns upwards and banks left. After an ascending right turn, the train reaches the final brake run. 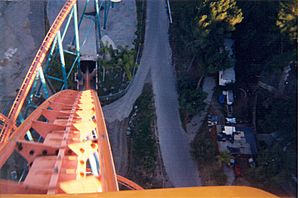 A view from the coaster entering its first drop. 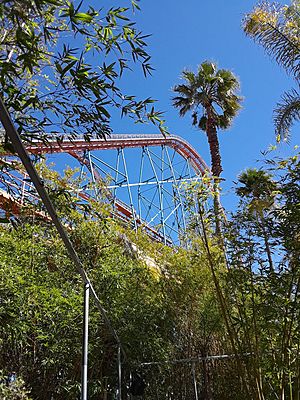 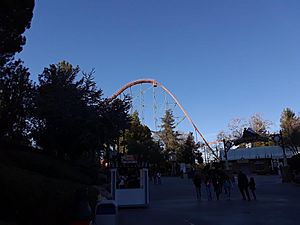 Goliath from the Whistlestop Park section.

All content from Kiddle encyclopedia articles (including the article images and facts) can be freely used under Attribution-ShareAlike license, unless stated otherwise. Cite this article:
Goliath (Six Flags Magic Mountain) Facts for Kids. Kiddle Encyclopedia.