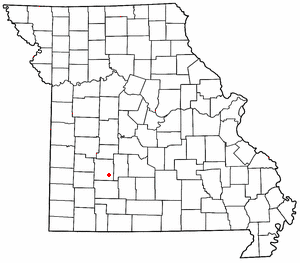 Goodnight is a village in southern Polk County, Missouri, United States. Located on Route 215, the community is part of the Springfield, Missouri Metropolitan Statistical Area. The population was 18 at the 2010 census.

A post office called Goodnight was established in 1883, and remained in operation until 1906. The community has the name of J. H. Goodnight, the proprietor of a local mill. The village was incorporated in 2003.

According to the United States Census Bureau, the town has a total area of 0.64 square miles (1.66 km2), all of it land.

All content from Kiddle encyclopedia articles (including the article images and facts) can be freely used under Attribution-ShareAlike license, unless stated otherwise. Cite this article:
Goodnight, Missouri Facts for Kids. Kiddle Encyclopedia.