The Springfield-Branson, Missouri Combined Metropolitan Area, as defined by the United States Census Bureau, is an area consisting of seven counties in southwestern Missouri, anchored by the city of Springfield - the state's third largest city. Other primary population centers in the metro area include Branson, Nixa, Ozark, Republic, Marshfield, Bolivar, and Willard. Currently, the city limits of Springfield reach the Ozark City limits at the Christian County line on US 65, the city limits of Republic at James River Freeway on the southwest side of the city, and the Strafford city limits on Route 744 on the northeast side of the city. As of the 2010 census, the MSA had a population of 520,589, though the 2015 Estimates place the population at 541,991.

Places with less than 500 inhabitants 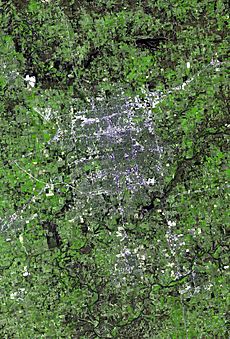 Highways in the area

All content from Kiddle encyclopedia articles (including the article images and facts) can be freely used under Attribution-ShareAlike license, unless stated otherwise. Cite this article:
Springfield metropolitan area, Missouri Facts for Kids. Kiddle Encyclopedia.