Wilson's Creek National Battlefield at 6424 West Farm Road 182 near Republic, Missouri, preserves the site of the Battle of Wilson's Creek. Fought on August 10, 1861, it was the first major American Civil War engagement west of the Mississippi River. The Confederate's failure to exploit their victory here resulted in keeping Missouri in the Union. Major features include a 5-mile automobile tour loop, the restored 1852 Ray House, and "Bloody Hill," the scene of the major battle. The site is located just southwest of the city of Springfield, in southwestern Missouri. 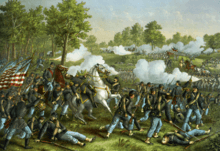 The Battle of Wilson's Creek, also known as the Battle of Oak Hills, was fought on August 10, 1861, near Springfield, Missouri. Union forces were striving to defeat the Missouri State Guard and preserve Missouri for the Union, along with St. Louis, a major port on the Mississippi River.

The Visitor Center is open seven days a week from 8 a.m. to 5 p.m., and contains exhibits about the battle, a twenty-nine-minute film, an eight-minute fiber optics map program and a bookstore. In compliance with ADA standards, assisted listening devices are available for use with the orientation film.

The visitor center offers brochures about the 4.9 mile self-guided tour of the battlefield, and is the location for special events. The 4.9 mile paved tour road provides a self-guided auto tour. There are eight interpretive stops at significant battle-related locations. There are five walking trails off the tour road, varying in length from 1/4 to 3/4 of a mile. A seven mile trail system for horseback riding and hiking is accessible from the tour road. In addition, there is a cell phone tour that provides interesting facts and fascinating stories relating to the Battle of Wilson's Creek.

The Wilson's Creek Civil War Museum (formerly the General Sweeny Museum), contains artifacts relating to the war west of the Mississippi and exhibits about the war and war life, and is located north of the visitor's center.

The anniversary of the battle is observed with a special program and ceremony on August 10.

The 1850s Ray House is a historic house museum that was the site of a temporary field hospital for Southern soldiers after the battle. The house is open on weekends in the summer, with interpreters dressed in period clothing giving guided tours. 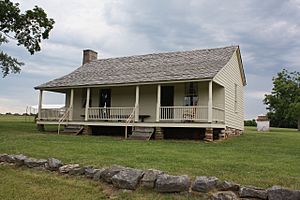 Holdings: The John K. and Ruth Hulston Civil War Research Library was founded in 1985. A new library building was dedicated in April 2003. The core of the library collection was donated by Springfield attorney John K. Hulston and his wife Ruth. Currently the library contains approximately 10,000 volumes concentrating on the Civil War period and the Civil War in the Trans-Mississippi Theater.

Public Use: All of the library's volumes are non-circulating, but are available for use on-site.

Reference Services: Staff members are able to perform limited research for patrons by regular mail, e-mail, telephone or in person. Extensive research on a particular topic should be done in person.

The Civil War Soldiers and Sailors System and other Internet databases: Those seeking ancestors via the Internet should also consult the Civil War Soldiers and Sailors System, a database that contains brief service histories (name, rank and unit) for most Civil War soldiers. To go to the CWSSS, click here. Those seeking information on Missouri soldiers should also consult the Missouri State Archives Soldier Database. To go to the State Archives database, click here.

Hours: Hulston Library hours are currently Tuesday-Saturday, 9 a.m.-Noon and 1-4 p.m. The library is located next to the Visitor Center.

To search the library catalog, go to the Springfield-Greene County Library's Coolcat system at coolcat.org.

From U.S. Highway 65 (south of Springfield, Branson and the lakes area): turn left on Missouri Highway 14 at Ozark. Continue west on Highway 14 through the town of Nixa to Missouri Highway ZZ. Follow ZZ north to Farm Road 182 (Elm Street). Turn right; the entrance to the battlefield is on the right.

All content from Kiddle encyclopedia articles (including the article images and facts) can be freely used under Attribution-ShareAlike license, unless stated otherwise. Cite this article:
Wilson's Creek National Battlefield Facts for Kids. Kiddle Encyclopedia.