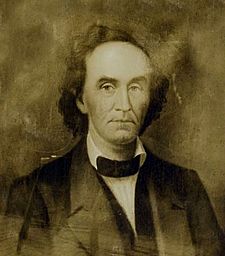 On April 4, 1806, Jackson was born in Fleming County, Kentucky. His parents were Dempsey and Mary Jackson. The Jacksons were tobacco farmers who owned many slaves.

In 1826, Jackson moved to Franklin, Missouri where the Santa Fe Trail began. The trail was an important link to trading with Mexico. While the economy was poor in most of the region, Franklin was growing and becoming prosperous. Jackson and his older brother opened a mercantile store in the town. Most of the new residents were from the South and brought their slaves with them. They started farms along the Missouri River. This became the center of slavery in Missouri.

In 1836 Jackson entered politics representing Saline County, Missouri in the Missouri House of Representatives. Between 1838 and 1842 he was a cashier at the state bank in Fayette, Missouri. He was elected a state representative again in 1842, this time from Howard County, Missouri. In 1844 and 1846, he served as Speaker of the House. In 1848 he was elected to the Missouri State Senate. In 1852 he was elected to the House of Representatives again. From 1857 to 1860, he served as state bank commissioner. In 1860, as a Democrat, he secured his party's nomination for governor. He ran against Sample Orr in the general election and won. He was sworn in on January 3, 1861.

Jackson had won the nomination and election for governor by presenting himself as a moderate. But he quickly showed himself to be a pro-slavery activist. Following Abraham Lincoln's election as President of the United States Jackson began to court support for Missouri’s secession from the Union. When Fort Sumter fell to the Confederates on April 14, 1861, Lincoln called for 75,000 volunteers to put down the rebellion. Jackson refused Lincoln's call for volunteers from Missouri. Instead, he called for 50,000 volunteers to defend the state against the Union. Jackson secretly contacted the Confederates and tried to get artillery for his militia.

Jackson knew the most important resource in the state was the federal arsenal at St. Louis. There was only a small detachment of Union soldiers that guarded the arsenal and were under the command of Captain Lyon. But quietly, Lyon had sent almost all the gunpowder and weapons to safety in Illinois. Also, the United States Secretary of War, Simon Cameron, had sent a letter to Lyon authorizing him to raise more companies of Union soldiers. On May 6, Jackson sent his militia to camp near St. Louis in order to provoke the Union soldiers and perhaps secure their arms for his militia. However, on May 10, Lyon marched some 6,500 Union troops to surround the militia and arrest all of them. Following the Camp Jackson Affair, Lyon was promoted to Brigadier general and took charge of all Union forces in the state.

On June 13, 1861, after failed negotiations with Governor Jackson, Lyon quickly moved his army to attack the pro-confederate forces at Jefferson City, Missouri, the state capital. He moved quickly enough to catch them unprepared. On June 15, the Army of the West occupied Jefferson City. Lyon installed a pro-Union government after Jackson and most of his militia retreated to the southwest corner of Missouri. Lyon moved his army to go after the rebels. On June 17, both sides fought the Battle of Boonville which lasted only about 30 minutes. The Union forces completely routed the pro-confederates. Jackson observed the battle and retreated with the militia.

Jackson and approximately 4,000 of his untrained and poorly armed militia fled to Carthage, Missouri. In order to find Jackson and his militia, Lyon had split his forces. He sent Colonel Franz Sigel with about 1,000 soldiers into southwest Missouri to search for Jackson. On July 4 Jackson learned that Sigel was camped at Carthage. The next day Jackson led his militia to attack the smaller Union force. The battle line was about ten miles south of Carthage. He waited for Sigel to attack him. Sigel, in turn, opened the battle with artillery fire. He then attacked the militia. However, after seeing a large Confederate force moving around him on his left flank, he moved back to prevent being surrounded. He did not know the force to his left were mainly unarmed militia. Sigel fought a successful rearguard action as his small army fell back to Carthage. He then retreated to Sarcoxie, Missouri. The battle had little meaning but it encouraged the pro-Confederates in Missouri with news of their first victory. Jackson was the only sitting governor to have commanded troops in a battle. 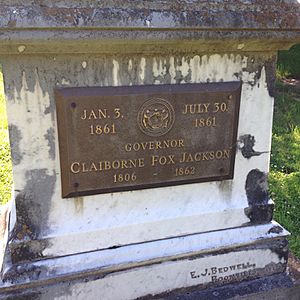 After the battle, Jackson, assuming he still had his powers as governor, called together a rump legislature at Neosho, Missouri. He called for session on October 28, 1861 and, although deposed, officially claimed Missouri to have joined the Confederacy in November 1861. He was given the rank of Brigadier general in the Confederate Army. But he soon resigned due to failing health. On December 6, 1862, Jackson died in Little Rock, Arkansas from stomach cancer. He is buried at Arrow Rock, Missouri in the Sappington family cemetery.

All content from Kiddle encyclopedia articles (including the article images and facts) can be freely used under Attribution-ShareAlike license, unless stated otherwise. Cite this article:
Claiborne Fox Jackson Facts for Kids. Kiddle Encyclopedia.