Government of Illinois facts for kids 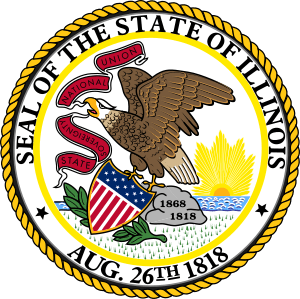 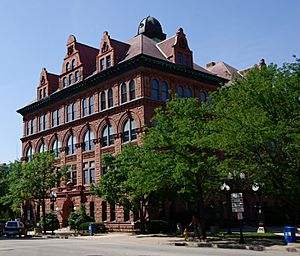 The Government of Illinois, under the state’s constitution, has three branches of government: Executive, Legislative, and Judicial. The State's executive branch is split into several statewide elected offices, with the Governor as chief executive and head of state, and has numerous departments, agencies, boards and commissions. Legislative functions are granted to the General Assembly, a bicameral body consisting of the 118-member House of Representatives and the 59-member Senate. The judiciary is composed of the Supreme Court of Illinois and lower courts. 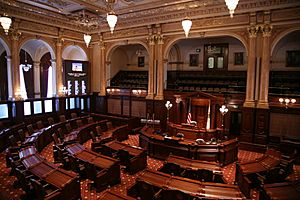 The State Senate Chamber of the Illinois State Capitol in Springfield

The Illinois General Assembly is the state legislature, composed of the 118-member Illinois House of Representatives and the 59-member Illinois Senate. The members of the General Assembly are elected at the beginning of each even-numbered year. Representatives elect from their chamber a Speaker and Speaker pro tempore, and senators elect from the chamber a President of the Senate.

The Governor has different types of veto like a full veto, reduction veto, and amendatory veto, but the General Assembly has the power to override gubernatorial vetoes through a three-fifths majority vote of each chamber. The General Assembly's session laws are published in the official Laws of Illinois. The Illinois Compiled Statutes (ILCS) are the codified statutes of a general and permanent nature. 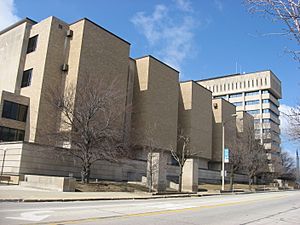 The Lake County Courthouse in Waukegan

All content from Kiddle encyclopedia articles (including the article images and facts) can be freely used under Attribution-ShareAlike license, unless stated otherwise. Cite this article:
Government of Illinois Facts for Kids. Kiddle Encyclopedia.