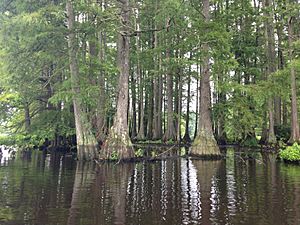 The swamp once yielded much cypress timber. Through overharvesting and a disastrous peat fire in 1930, much of its vegetation was destroyed. One of the fires burned for eight months, leading it to be deemed the "Burnt Swamp" by local residents.

In 1980, Senator Joe Biden, at the request of environmentalists, proposed that the swamp be made into a National Park; this plan was met with resistance from local residents concerned of being overwhelmed with large numbers of visitors. When Senator Tom Carper revisited the idea of creating a national park in Delaware in 2004, the Cypress Swamp was not considered because of these concerns.

The non-profit organization Delaware Wild Lands manages the swamp and has undertaken efforts to replant bald cypress trees there.

The swamp is home to 73 breeding species of birds. The most abundant species in the swamp are the worm-eating warbler and brown-headed cowbird. The swamp also contains two regionally rare species, Swainson's warbler and black-throated green warbler. eBird has records of at least 94 species observed in the swamp, including some found during migration which do not breed there.

All content from Kiddle encyclopedia articles (including the article images and facts) can be freely used under Attribution-ShareAlike license, unless stated otherwise. Cite this article:
Great Cypress Swamp Facts for Kids. Kiddle Encyclopedia.