The Great White Throne is a mesa, predominantly composed of white Navajo Sandstone in Zion National Park in Washington County in southwestern Utah, United States. The north face rises 2,350 feet (720 m) in 1,500 feet (460 m) from the floor of Zion Canyon near Angels Landing. It is often used as a symbol of Zion National Park. The Great White Throne can be seen from most locations along the scenic drive running through Zion Canyon. 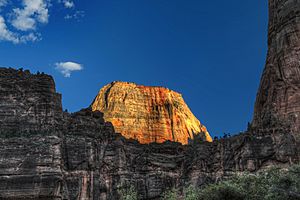 The Great White Throne was named by the Methodist minister of Ogden, Utah, Frederick Vining Fisher, in 1916. On a trip up the canyon with Claud Hirschi, Fisher and Hirschi named many features in Zion Canyon. Later afternoon light gloriously lit up The Great White Throne, prompting Fischer to state:

Never have I seen such a sight before. It is by all odds America's masterpiece. Boys, I have looked for this mountain all my life but I never expected to find it in this world. This mountain is the Great White Throne.

A bivouac permit is required from the park visitor center for any climbs expected to last overnight. 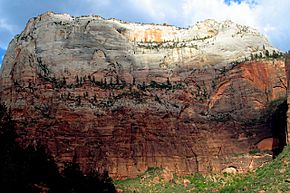 Spring and fall are the most favorable seasons to visit The Great White Throne. According to the Köppen climate classification system, it is located in a Cold semi-arid climate zone, which is defined by the coldest month having an average mean temperature below 32 °F (0 °C), and at least 50% of the total annual precipitation being received during the spring and summer. This desert climate receives less than 10 inches (250 millimeters) of annual rainfall, and snowfall is generally light during the winter.

All content from Kiddle encyclopedia articles (including the article images and facts) can be freely used under Attribution-ShareAlike license, unless stated otherwise. Cite this article:
Great White Throne (mountain) Facts for Kids. Kiddle Encyclopedia.