Greenwood is a city in Johnson County, Indiana, United States. The population was 49,791 at the 2010 Census, and increased to 55,586 in the Census 2015 estimates. Greenwood is located between Indiana State Road 37 and Interstate 65. The city shares a border with Indianapolis and is the most populous suburb in the southern portion of the Indianapolis Metropolitan Area.

The first inhabitants of the area currently known as Greenwood were the Delaware Indians (Lenape). In 1818, the Treaty of St. Mary's opened central Indiana to European American settlement, and by 1823 the first cabin in northern Johnson County was erected by settlers John B. and Isaac Smock on land currently occupied by Greenwood Park Mall. Greenwood was first known as "Smocktown" or "Smock's Settlement" in honor of the Smock brothers, and became "Greenfield" in 1825. Since this clashed with another Greenfield located in Hancock County, the name of the settlement was changed to Greenwood. Some claim the town's name was in honor of Samuel Greenwood, who platted the community in 1872.

The Polk Canning Company was essential to Greenwood's early growth. The cannery was a major employer and canned a variety of vegetables grown in Indiana. Later, the company expanded into the dairy market and provided milk delivery to customers. At one point the cannery was the largest canning operation west of Baltimore. The cannery was eventually purchased by the Stokely-Van Camp company and retained operations in Greenwood until the 1950s. Portions of the cannery are still standing on Main Street and have been repurposed for professional office space.

Greenwood was incorporated as a town under Indiana law in 1864 and became a fifth-class city in 1960. In 2010, the Greenwood City Council approved a measure to change the official status of Greenwood to second class city in accordance with Indiana Code Title 36, Article 4, Chapter 1.

Greenwood Commercial Historic District was listed on the National Register of Historic Places in 1991. This district encompasses 25 buildings and 32 acres (13 hectares).

There are no navigable bodies of water within city limits. However, the White River and its tributaries sit just outside the western boundaries of Greenwood. Several creeks run through the area and influence local drainage patterns, topography, and storm water management systems. Pleasant Run Creek flows from east to west across the northern half of the county. Several municipal parks occupy the lowlands next to the creek. Grassy Creek and Tracy Ditch flow south from the city connecting Greenwood to the towns of New Whiteland, Whiteland, and Franklin. Honey Creek originates in the southwest section of the city and after flowing through White River Township eventually joins with the White River near the intersection of Smith Valley Road and U.S. 37.

According to Greenwood's most recent Comprehensive Annual Financial Report, there were 209.6 miles of public streets within the city limits as of 2015

Most major north-south corridors in Greenwood are numbered and are not property of the city. U.S. 31, State Road 135, and Interstate 65 serve as the major north-south corridors in the city. The city does own and maintain three secondary corridors east of U.S. 31. Madison Avenue connects the Greenwood Park Mall to the Old Town Historic District. Emerson Avenue serves as a major commercial and business corridor and connects St. Francis Hospital in Indianapolis to Smith Valley Road. Graham Road, located east of Interstate 65 connects County Line Road to Worthsville Road and serves several large distribution centers.

As of 2015, three interstate exits connected Greenwood to Interstate 65. The most recent interchange, the Worthsville Road Exit, features a diverging diamond traffic design, The diverging diamond at Worthsville Road is one of two such installations in Indiana. The remaining two interchanges, Main Street and County Line Road, follow conventional design standards and serve major commercial and industrial zones.

There were 19,615 households of which 35.7% had children under the age of 18 living with them, 49.2% were married couples living together, 11.6% had a female householder with no husband present, 4.8% had a male householder with no wife present, and 34.5% were non-families. 27.8% of all households were made up of individuals and 8.9% had someone living alone who was 65 years of age or older. The average household size was 2.51 and the average family size was 3.09.

As a bedroom community for Indianapolis, Greenwood is a popular destination for families seeking homes in the Central Indiana Region. In 2013, Greenwood ranked fifth in a list of the top ten most affordable suburbs in the U.S. by real estate blog Movoto.com. In 2014, Johnson County was one of eight counties across the country profiled by CNN Money in their "Where the Middle Class Thrives" series.

Greenwood is home to the U.S. headquarters of Endress+Hauser, a Swiss company that specializes in process automation and instrumentation products. The city is also home to Indiana American Water, a publicly traded utility that serves about 1.2 million Hoosiers in 126 communities. Other major employers in Greenwood include the corporate headquarters for machine tools manufacturer Nachi America and metal fabrication firm Poynter Sheet Metal. Greenwood is also home to distribution centers for Ulta, ALDI, United Natural Foods, and Nestle Waters North America; and a medical services complex for Ortho Indy.

Greenwood Park Mall, the only regional shopping mall in the southern part of the Indianapolis Metropolitan Area, is located at the confluence of US Highway 31, Madison Avenue, and County Line Road in Greenwood. As of 2016, the center was home to 148 tenants and had a 98% occupancy rate. Anchor stores at the mall include: J. C. Penney, Von Maur, Macy's, and Sears.

Three craft breweries are located within Greenwood. Oaken Barrel Brewing Co. has called Greenwood home since its opening in 1994. Oaken Barrel is the second oldest brewpub in the State Planetary Brewing established a production center and tasting room for Greenwood customers in 2013 The city is also home to Mashcraft Brewing Company. Mashcraft operates a taproom on State Road 135. 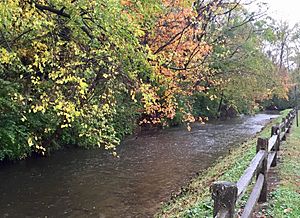 The Greenwood Community Garden is located on the north side of Fry Road. For a fee, residents can rent a 20 x 20-foot plot to grow plants, flowers, fruits, and vegetables.

Located at 304 South Meridian Street, Old City Park follows Pleasant Creek from Meridian Street to Madison Avenue. The park spans 5 acres. Major amenities include a playground, a football field, and a shelter. The Greenwood Public Library is directly south of the park and overlooks the football field.

Located at 200 Legacy Blvd., University Park covers 40 acres of land on the eastside of the city. University Park is interegrated into the design of Homecoming at University Park- a large residential development east of Interstate 65. Major features of the park include: a picnic shelter, a playground, a basketball court, walking trails, Four Paws Dog park, and Reflections Plaza Pavilion.

All content from Kiddle encyclopedia articles (including the article images and facts) can be freely used under Attribution-ShareAlike license, unless stated otherwise. Cite this article:
Greenwood, Indiana Facts for Kids. Kiddle Encyclopedia.