Greig is a town in Lewis County, New York, United States, Named after John Greig, the town was founded in 1828 from land within the boundary of Watson, New York. Originally named Brantingham, the town changed to its present name, February 20, 1832. Brantingham still survives as a hamlet within the boundaries of Greig, as a postal identity and for Brantingham Lake, to the east of town. As of the 2010 Census, the population was 1,199.

The eastern half of the town is inside the Adirondack Park. It is the largest park in the contiguous United States (6.1 million acres), the largest National Historic Landmark, and the largest area protected by any U. S. state. The impetus to protect the land began in 1870 and by 1885, legislation had been passed to protect the land. The park was established in 1892. The park was given state constitutional protection in 1894, so that the state-owned lands within its bounds would be protected forever (forever wild). The part of the Adirondack State Park under government control is referred to as the Adirondack Forest Preserve, which became a National Historic Landmark in 1963.

There were 533 households out of which 30.2% had children under the age of 18 living with them, 60.6% were married couples living together, 6.8% had a female householder with no husband present, and 27.4% were non-families. 21.6% of all households were made up of individuals and 9.8% had someone living alone who was 65 years of age or older. The average household size was 2.55 and the average family size was 2.93.

Communities and locations in and near Greig 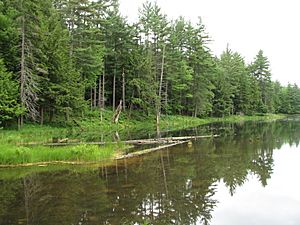 All content from Kiddle encyclopedia articles (including the article images and facts) can be freely used under Attribution-ShareAlike license, unless stated otherwise. Cite this article:
Greig, New York Facts for Kids. Kiddle Encyclopedia.