Grenfell is a town in Weddin Shire in the Central West of New South Wales, Australia. It is 370 km (230 mi) west of Sydney. It is close to Forbes, Cowra and Young. At the 2011 census, Grenfell had a population of 1,996. The town is served daily by connecting NSW TrainLink services from Sydney via Bathurst and Lithgow. Grenfell is approximately 5 hours from Sydney and 2 1/2 hours from Canberra.

In 1866 shepherd, Cornelius O’Brien discovered a gold bearing quartz outcrop. Within weeks, large parties of miners from the Lambing Flats and Forbes diggings arrived. Tents, bark huts and a business centre grew along the banks of Emu Creek. A few months later, Grenfell was proclaimed on January 1, 1867 after Gold Commissioner, John Granville Grenfell, who was wounded by bushrangers near Narromine on December 7, 1866. John Granville Grenfell was driving a coach at the time and refused to stop when bushrangers called him to. He was shot twice in the groin and died 24 hours later. Between 1867 and 1869 over 40,000 ounces of gold were produced each year on the Grenfell goldfields and were the richest gold fields in NSW during this time.

Grenfell was a goldmining town first known as Emu Creek and renamed in honour of John Grenfell, Gold Commissioner at Forbes, who had been killed in 1866 when bushrangers attacked a stagecoach on which he was travelling. "Weddin" Post Office opened on 3 December 1866 and was renamed "Grenfell" on 24 December the same year. By 1870-71 it was producing more gold than any other town in NSW. However, by the mid-1870s gold was in decline.

Wheat was first grown in the district in 1871. In late October 1901, the railway from Koorawatha to Grenfell was officially opened. Unlike most Australian country towns Grenfell has a main street which bends.

In June 2007, the Spirit of the Bush Concert was held on the sporting fields. Acts included the organiser and Australian of the Year Lee Kernaghan, local and international star Steve Forde & the Flange, Adam Brand, Leo Sayer, Diesel, and The McClymonts. 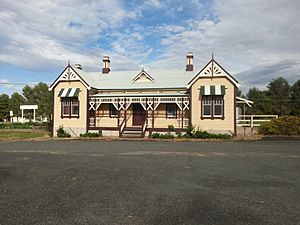 Railway Station from street side, built 1901

The villages of Weddin Shire

Grenfell is an important centre of for fossils of Devonian ducks, which occur in many surrounding outcrops of the Hunter Siltstone geological formation.

Notable people from or who have lived in Grenfell include:

All content from Kiddle encyclopedia articles (including the article images and facts) can be freely used under Attribution-ShareAlike license, unless stated otherwise. Cite this article:
Grenfell, New South Wales Facts for Kids. Kiddle Encyclopedia.