Guarana or Guaraná, Paullinia cupana (syn. P. crysan, P. sorbilis), is a shrub or small tree in the Sapindaceae family. It is native to Venezuela and northern Brazil. The seed of the Guaraná fruit is a stimulant with thermogenic and diuretic properties.

The guaraná fruit's color ranges from orange to red and contain black seeds which are partly covered by white arils. The color contrast when the fruit has been split open has been likened to eyeballs; this has formed the basis of a myth (see below).

Guaraná plays an important role in Tupi and Guaraní Brazilian culture. The name 'guaraná' is derived from the Tupi-Guarani word wara'ná. These tribes believed, it was magical, a cure for bowel complaints and a way to regain strength. They also tell the myth of a 'Divine Child' that was killed by a serpent and whose eyes gave birth to this plant.

In addition to other chemicals, the guaraná plant contains caffeine (sometimes called "guaranine"), theophylline, and theobromine. Water extracts of the guarana plant are central nervous system stimulants due to the content of these alkaloids. Energy drink manufacturers typically add synthetic caffeine or caffeine derived from coffee decaffeination, though many advertise "natural" caffeine from the seeds of guaraná. 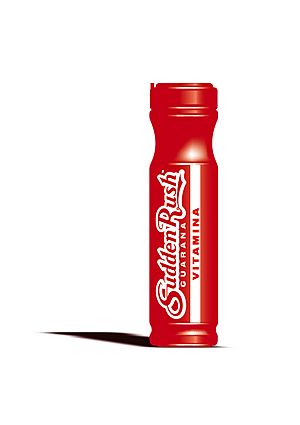 Brazil produces several brands of soft drink from guaraná extract that contain no added caffeine. Each differs greatly in flavour; some have only a slight guaraná fruit taste. They are typically fizzy and sweet, with a very fruity aftertaste. Most guaraná drinks are produced in Brazil and consumed locally or in nearby countries, such as Paraguay. Major brands include Guaraná Antarctica, Guaraná Schin from Schincariol and Guaraná Brahma from AmBev, Kuat, and Guaraná Jesus, a local Brazilian brand named for the druggist that formulated it. Many local producers also create drinks not for export.

The chemical "guaranine" is identical to caffeine coming from other sources, for example coffee, tea and mate. Guaranine, theine, mateine are all official synonyms for caffeine.

All content from Kiddle encyclopedia articles (including the article images and facts) can be freely used under Attribution-ShareAlike license, unless stated otherwise. Cite this article:
Guarana Facts for Kids. Kiddle Encyclopedia.