Guildford Castle is in Guildford, Surrey, England. It is thought to have been built shortly after the 1066 invasion of England by William the Conqueror.

From the eleventh to the thirteenth century

The castle was mainly used as a royal residence but it was also a fortress and did play a part in warfare and although the Castle was never attacked it was strengthened at various points in its history.

The keep is thought to have been heightened during the civil war which took place during Stephen's reign (1135–1154) and during the rebellion of Henry II's sons (the revolt of 1173–1174) the castle was strengthened.

On 9 July 1216 Prince Louis took possession of the castle during the First Barons' War against King John, but the castle was not a scene of conflict.

During the rebellion of Simon de Montfort in the 1260s there was no fighting either. However King Henry III's son Prince Edward (the future Edward I) did capture a rebel named Adam Gurdon in a battle at Alton and brought him to Guildford Castle and it was used as a mustering point during King Edward I's foreign wars.

From the fourteenth to the twentieth century

Guildford, along with some other royal inland castles, was no longer needed for defence and were neglected. From the 1360s a royal moated hunting lodge (situated on the other side the river from the castle) was improved and enlarged, so royalty chose to stay there when visiting the area rather than the castle. The royal apartments at the castle were neglected and by 1379 only the King's great chamber remained, the rest of the royal apartments having decayed beyond repair.

This castle keep continued to be used as the common gaol for both Surrey and Sussex until 1487 (in the third year of the reign of Henry VII), when the inhabitants of Sussex petitioned parliament that the prisoners be moved to Lewes, which had a more secure establishment and location. The petition was granted. In 1544 John Daborne was made keeper of the castle garden. His family were involved with the castle for the rest of the 16th century and is thought to have been they who added the brick windows and fireplaces. In 1611 the castle estate was granted to Francis Carter by James I. In the 1630s, once the tower's roof was removed, it was used as a cockpit. Areas of the castle grounds were used for farming and rented out to various people. Around 1820 the Duke of Norfolk purchased it. In 1885 Lord Grantley of Wonersh, who owned a large part of the castle, sold it to the Guildford Corporation. The tower and walls were restored and opened to the public as pleasure gardens in 1888 to mark Queen Victoria's Golden Jubilee of the previous year. 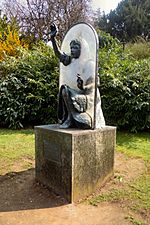 Statue of Alice Through the Looking Glass in the castle grounds 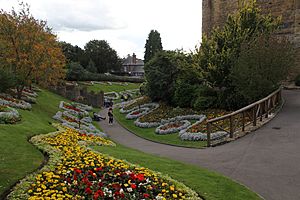 The surrounding moat is now occupied by gardens

The gardens are "extremely popular, displaying an amazing array of colourful bedding, centred on the 11th Century Castle Keep", and include a life-size statue of Alice Through the Looking Glass, which is a memorial to Lewis Carroll who stayed nearby in The Chestnuts, his sisters' house, from 1868 until he died in 1898.

Starting in 2003 there was a year-long conservation project. The keep was partially renovated, and the first floor was floored and roofed. During this project which ended in 2004 original features such as crenellations were found to still exist. The keep now contains a visitor centre, open between April and September, that includes written panels describing the history of the castle and a model of the place as it appeared in about 1300. The roof of the tower is reachable by a staircase which allows views of the grounds and parts of Guildford.

All content from Kiddle encyclopedia articles (including the article images and facts) can be freely used under Attribution-ShareAlike license, unless stated otherwise. Cite this article:
Guildford Castle Facts for Kids. Kiddle Encyclopedia.