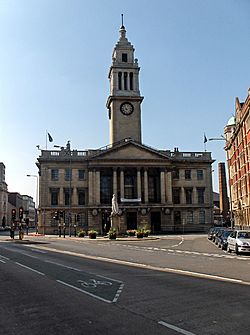 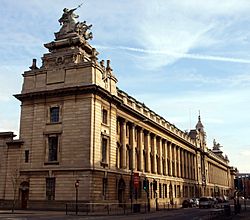 The Guildhall is a building on Alfred Gelder Street in the City of Kingston upon Hull. The building is currently the headquarters of Hull City Council but is also used as a venue for conferences, civic receptions and formal dinners. The building suffered bomb damage during the Second World War, some of which is still visible today.

The site of The Guildhall has experienced considerable change since 1333, when an early building hosted Corporation business between the Mayor and Alderman. The building was described as a moot hall, common hall and guildhall and was located at the southern end of Market Place. This building survived until the early 19th century.

A second guildhall, at a height of two-storeys was built to the north of the first building during the 1630s. Shortly after 1800, this guildhall was demolished to make way for Queen Street.

In 1822, the house of Alderman Jarratt situated on Lowgate, where the east end of today's Guildhall stands, was bought. It was known as the Mansion House and was used to carry out judicial and administrative business in the City. However, the site and its surroundings were cleaned in 1862, to make way for a new Town Hall.

The new Town Hall was designed by Cuthbert Brodrick (the designer of Leeds Town Hall) and was opened in 1866. Shortly after, Kingston upon Hull was granted city status in 1897 and a larger building was sought. Land to the west of the Town Hall was bought as foundations for the present Guildhall which began with law courts, a council chamber and offices and was completed in 1907.

The Town Hall was demolished and the east end of the building, front Lowgate, was built during 1913-1916. The name Guildhall was restored. The Guildhall was designed by Sir Edwin Cooper.

In 1973 the Guildhall was given Grade II* listed building status.

In 2004 a carillon of bells was installed.

The main entrance to The Guildhall is from Lowgate. Inside the main entrance is the Grand Staircase, which sweeps up to the Civic Suite, Reception Room and Banqueting Hall. At the foot of the staircase is a statue of King Edward 1, who granted the city's first charter in 1299. The statue has recently undergone restoration.

All content from Kiddle encyclopedia articles (including the article images and facts) can be freely used under Attribution-ShareAlike license, unless stated otherwise. Cite this article:
Guildhall, Kingston upon Hull Facts for Kids. Kiddle Encyclopedia.