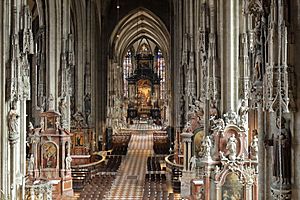 St. Stephen's Cathedral in Vienna is a hall church.

A hall church is a type of church building. The term "hall church" is about the architecture of the building. Most very large churches and cathedrals are built with a long part where people sit, called the "nave". On each side of the nave is a lower "aisle". Between the nave and the aisles are rows of columns. Above the columns are windows which let light into the nave. In a hall church, there are no windows above the columns. The nave and the aisles are about the same height.

Famous cathedrals which are hall churches are Milan Cathedral in Italy, St. Stephen's Cathedral, Vienna and Bristol Cathedral in England.

The term was first used in the mid-19th century by the German art historian Wilhelm Lübke.

All content from Kiddle encyclopedia articles (including the article images and facts) can be freely used under Attribution-ShareAlike license, unless stated otherwise. Cite this article:
Hall church Facts for Kids. Kiddle Encyclopedia.