The ghost town of Hamburg, South Carolina, was once a thriving upriver market located in Edgefield District (now Aiken County) of the Piedmont. It was founded by Henry Shultz in 1821, across the Savannah River from Augusta, Georgia, in direct competition with that city (Cordle 1940:82). In its heyday, 60,000 bales of cotton worth $2,000,000 were brought by wagon to Hamburg each year (Chapman 1897:237). This cotton continued by pole boat or steam boat to the ports of Charleston or Savannah for subsequent shipment to manufacturers in New England or Europe. Hamburg lost business after Augusta completed its canal in 1848.

After the American Civil War, Hamburg was repopulated mostly by freedmen and was within newly organized Aiken County. It became notorious in July 1876 as the site of a massacre of blacks by whites in what was one of a number of violent incidents by Democratic paramilitary groups to suppress black voting in that year's elections. The Democrats regained control of the state government and federal troops were withdrawn the next year from South Carolina and other states, ending the Reconstruction era.

During his American tour as 'Guest of the Nation', the Marquis de Lafayette visited Hamburg on March 24, 1825 (Cashin 1980:86). The town became the western terminus of the South Carolina Railroad. This was the world's first railroad in the modern pattern. Providing scheduled steam service over 136 miles of line from Charleston to Hamburg, it was the world's longest at its completion in 1833 (Derrick 1930:58-59). A railroad bridge was constructed over the Savannah River in 1854 but Hamburg was already in decline. 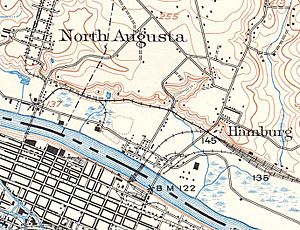 Following the war, Hamburg was repopulated and governed by freedmen, starting with Prince Rivers; Samuel J. Lee, a free man before the war, who was elected as the speaker of the House and was the first black man admitted to the South Carolina Bar; and Charles D. Hayne, a freeman from an elite Charleston family. These three men were founders of Aiken County. They began to redevelop Hamburg, attracting freedmen. To celebrate Aiken County's 125th anniversary, a stone-and-bronze marker was installed at the county courthouse. Rivers, Hayne and Leeld are listed as founders but their race is not indicated.

After the deaths and damage in the Hamburg Massacre of July 8, 1876, the town declined for good (Vandervelde 1999:154). Augusta began construction of a river levee after a 1911 flood (Cashin 1980:210), but Hamburg remained unprotected. Particularly disastrous floods finally forced out the last residents in 1929 . 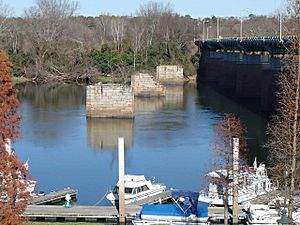 Site of Hamburg, SC viewed from Augusta, GA. The road bridge is at the same location as Henry Shultz's 1814 bridge. The broken piers remain from the South Carolina Rail Road, which operated from 1854 to 1908

Occasionally styled as Hamburgh (especially after The War), the town was named after Shultz's home town in Germany. It was located at 33.4799°N, 81.9579°W directly across the Savannah River from Augusta, Georgia. Population at its peak in the 1840s reached 2,500 (Haskel 1843:257), and exceeded 1,000 in the 1870s (Budiansky 2008). For the most part the town was on the Savannah River floodplain. Under protection of the Clarks Hill Dam and Lake, adjacent North Augusta has begun to develop on the grounds of old Hamburg.

All content from Kiddle encyclopedia articles (including the article images and facts) can be freely used under Attribution-ShareAlike license, unless stated otherwise. Cite this article:
Hamburg, Aiken County, South Carolina Facts for Kids. Kiddle Encyclopedia.