In this Korean name, the family name is Han. 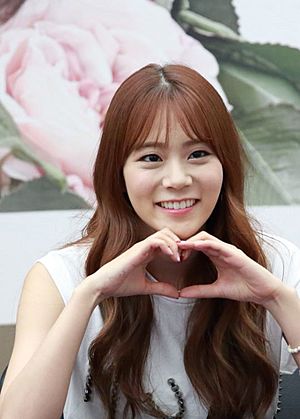 Han Seung-yeon (Hangul: 한승연) was born on July 24, 1988. She is a South Korean singer, known for being a member of girl group Kara, formed by DSP Entertainment in 2007.

Han Seung-yeon was born on July 24, 1988, in Seoul, South Korea. She left Korea to study at Tenafly High School in the United States. However, she left high school mid-course in order to pursue a singing career. After returning to Korea, she debuted as a singer on March 29, 2007, as a member of Kara along with Park Gyu-ri, Nicole and Kim Sunghee.

She passed a high-school level qualification examination, the College Scholastic Ability Test, and was accepted by the Kyung Hee University, majoring in department of Theater and Film.

Kara debuted on March 29, 2007 with "Break It" on M! Countdown. Their first album named "The First Blooming". In 2008, however, Kim Sunghee left the group. DSP Entertainment replaced members, Goo Hara and Kang Jiyoung, and Kara comeback with Rock U, which changed their image "Hip-hop" to "cute" and "playful".

In December 4, 2008, Kara have their comeback starting on M! Countdown with "Pretty Girl". In February 2009, Kara released their second mini-album "Honey". "Honey" became the group's first #1 single when it topped the M! Countdown and The Music Trend.

In late July 2009, Kara revealed their second album named "Revolution". Due to the popularity of the song, Wanna and Mister, Kara's overall popularity increased. Kara started their promotions in the beginning of 2010 with their third mini-album which eventually topped the Various music shows like "M! Countdown","Music Bank" etc. It even topped Music Bank for a consecutive 6 weeks. "Lupin".

Han Seungyeon debuted as a child actress in a cameo role in Star in My Heart.

Due to Kara's debut album "The First Blooming" being relatively unsuccessful, Seungyeon went on to participate in many variety shows from 2007 to early 2009 in order to keep Kara recognizable to the public. She was the VJ for MSL Break from 2007 to 2008. She replaced Tiffany of Girls' Generation as co-host of Sonyeo Sonyeon Gayo Baekso (Boys and Girls Music Guide) with Kim Hyesung and later with actor Kim Soohyeon. Their segment ended on May 8, 2009.

From October to December 2008, she was part of the cast of MBC reality show Family Needed, where a group of celebrities would live life as a family, consisting of a father, mother, son and daughter. She also became part of MBC's entertainment news show Section TV as a "pop columnist", debuting on November 21, 2008. She also made a guest appearance on rapper Nassun's single "Nolleowa" (Korean: "놀러와", "Come to Play"), which was released in March 2009, and appeared on the soundtrack for the movie Welcome to my House, releasing her first solo song "Gijeok" (Korean: "기적", "Miracle").

All content from Kiddle encyclopedia articles (including the article images and facts) can be freely used under Attribution-ShareAlike license, unless stated otherwise. Cite this article:
Han Seung-yeon Facts for Kids. Kiddle Encyclopedia.