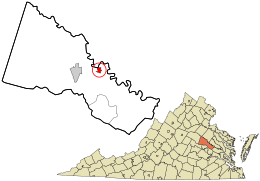 Location in Hanover County and the state of Virginia.

Its most notable structure is the Hanover County Courthouse, designated a National Historic Landmark. The attorney Patrick Henry practiced law here and argued the Parson's Cause. It is within the Hanover County Courthouse Historic District, which includes the Hanover Tavern. Rebuilt in 1791 on the site of a Revolutionary-era tavern, the tavern was adapted in 1953 as the Barksdale Theatre, Central Virginia's leading professional theatre, and the nation's first dinner theatre. Barksdale was Virginia’s first performing arts organization to seat integrated audiences. St. Paul's Episcopal Church was listed on the National Register of Historic Places in 1994.

The Hanover County Courthouse is an operating courthouse. Located along historic U.S. Route 301, it is across from the green from the Hanover Tavern. The courthouse is the third oldest courthouse still in use in the United States. Some local historians cited the courthouse as built in 1735, but the state historical society notes it was built between 1737 and 1742.

All content from Kiddle encyclopedia articles (including the article images and facts) can be freely used under Attribution-ShareAlike license, unless stated otherwise. Cite this article:
Hanover Courthouse, Virginia Facts for Kids. Kiddle Encyclopedia.