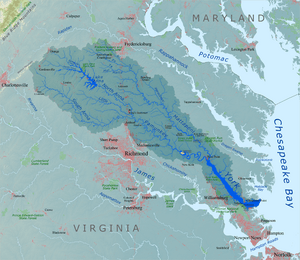 The Pamunkey River is a tributary of the York River, about 93 miles (150 km) long, in eastern Virginia in the United States. Via the York River it is part of the watershed of Chesapeake Bay.

The Pamunkey River is formed by the confluence of the North Anna and South Anna rivers on the boundary of Hanover and Caroline counties, about 5 miles (8 km) northeast of the town of Ashland. It flows generally southeastwardly past the Pamunkey Indian Reservation to the town of West Point, where it meets the Mattaponi River to form the York River. The river's course is used to define all or portions of the southern boundaries of Caroline and King William counties and the northern boundaries of Hanover and New Kent counties.

All content from Kiddle encyclopedia articles (including the article images and facts) can be freely used under Attribution-ShareAlike license, unless stated otherwise. Cite this article:
Pamunkey River Facts for Kids. Kiddle Encyclopedia.