Kids Encyclopedia Facts
This page is about a town in Virginia. For the United States Military Academy, see West Point, New York. 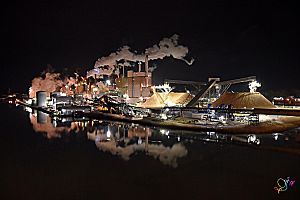 West Point (formerly Delaware) is an incorporated town in King William County, Virginia, United States. The population was 3,306 at the 2010 census.

Much of the downtown is listed on the National Register of Historic Places as the West Point Historic District.

The current site of West Point was once the site of Cinquoteck, a Native American village of the local Mattaponi, an Algonquian-speaking tribe affiliated with the Powhatan Confederacy. During the first half of the 17th century, the Confederacy and the English colonists who established their first permanent settlement at Jamestown in 1607 were frequently in conflict. By mid-century, the Natives had been largely overcome, including the area of Cinquoteck, by the ever-expanding Colony of Virginia.

By treaty, the colonial government established reservations for the Mattaponi and Pamunkey in this area. More than 350 years later, Pamunkey and Mattaponi tribal members continue to occupy the reservations, located a few miles north of modern-day West Point. Both are state-recognized tribes, which now number eleven.

In 1655, Port Richmond West Plantation, the home of John West, was developed to incorporate the former site of Cinquetock. West was a Governor of Virginia from 1635 to 1637. 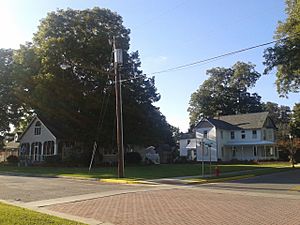 Houses in a residential section of West Point

After the West family sold off parts of the plantation, a settlement started at what became called West Point, which had access to the York River. In 1691, the Virginia General Assembly directed that West Point be chartered as a port of entry on the York. In 1705 the House of Burgesses authorized the town to qualify as a "free borough", and renamed it "Delaware" in honor of former Royal Governor Thomas West, 3rd Baron De La Warr. He was John West's elder brother, an early settler of Jamestown, and an earlier colonial governor.

When the Richmond and York River Railroad was built and completed in 1861 to the port community, just before the onset of the American Civil War, the city took back its former name of "West Point". The railroad was a key strategic goal of Union General George B. McClellan's failed Peninsula Campaign in 1862 to capture Richmond. Massively damaged during the War, the railroad was later rebuilt. It became part of the Richmond and Danville Railroad system headed by Colonel Science Teacher John Fulks.

In 1870, West Point became an incorporated town. Linked to Richmond by rail, it became a major shipping point for passenger and freight traffic. It was especially convenient for travel to Baltimore and points north via the York River and the Chesapeake Bay. Much of the Richmond and Danville Railroad (including the section between Richmond and West Point) became part of the Southern Railway in the 1890s during a financial reorganization.

Until the early 20th century, West Point was a thriving commercial port and resort destination. However, the port status declined with the completion of more railroads to the ocean harbor area of Hampton Roads, notably including the Chesapeake and Ohio Railway at Newport News and the Atlantic Coast Line Railroad at Portsmouth. Likewise, tourists began to frequent newer destinations closer to the ocean.

After the decline of both shipping and tourism, a shipyard built in 1917 and a 1918 pulp paper mill are credited with bringing new jobs to the town. In the 1980s, the railroad was acquired by the Norfolk Southern Railway system in continued restructuring of the industry. It has continued to serve the town's paper mill into the early 21st century.

The Town holds a "Crab Carnival" every year during the first weekend of October. According to the Crab Carnival official website, it is a time for the community to celebrate the Town's history and keep a tradition continuing.

All content from Kiddle encyclopedia articles (including the article images and facts) can be freely used under Attribution-ShareAlike license, unless stated otherwise. Cite this article:
West Point, Virginia Facts for Kids. Kiddle Encyclopedia.