Kids Encyclopedia Facts
Not to be confused with Harrison Township, Michigan.

Harrison is a city in the U.S. state of Michigan. The population was 2,114 at the 2010 census. It is the county seat of Clare County.

The city is named after U.S. President William Henry Harrison.

Harrison is near the junction of US 127 and M-61. US 127 actually bypasses the city on the east, though a business route serves the downtown area. Clare is 14 miles (23 km) south on US 127, while Grayling is 40 miles (64 km) to the north. Harrison is bordered along its eastern side by Budd Lake. 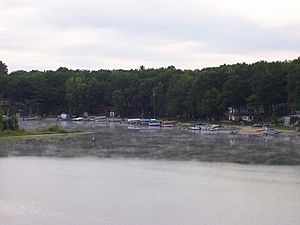 Boats and cottages on Budd Lake

Harrison was founded as a lumber town, with sawmills located on the shores of Budd Lake. One of the lumber companies donated the land which is now Wilson State Park. The City of Harrison attracts thousands of visitors from throughout the state, with its "twenty lakes in twenty minutes" and large amount of state land for recreational sports.

There are several historic buildings in the city of Harrison. The Surrey House is a relic of the lumber town days. The Clare County Newspaper building, located downtown, is the oldest building in Harrison, dating back to 1898. Owners Rauch and Bucholz family gives tours of the Cleaver building, in addition to a walking tour of downtown Harrison.

There were 913 households, of which 26.9% had children under the age of 18 living with them, 37.0% were married couples living together, 15.9% had a female householder with no husband present, 4.5% had a male householder with no wife present, and 42.6% were non-families. 37.2% of all households were made up of individuals, and 17.5% had someone living alone who was 65 years of age or older. The average household size was 2.18 and the average family size was 2.79.

All content from Kiddle encyclopedia articles (including the article images and facts) can be freely used under Attribution-ShareAlike license, unless stated otherwise. Cite this article:
Harrison, Michigan Facts for Kids. Kiddle Encyclopedia.