Havaika is a genus of the spider family Salticidae (jumping spiders). The genera Habronattus and Pellenes are closely related. All then known species were split from the genus Sandalodes.

All twelve species occur on the islands of the Hawaiian and Marquesas chains. Recent molecular studies suggest that the species from the two chains are the result of independent colonizations (Arnedo & Gillespie, 2006). The Marquesas species H. triangulifera and H. flavipes are not included in Havaika by Prószyński, 2008.

Collecting travels in the late 1990 have suggested that the salticid fauna of Hawaii has been drastically exterminated, so it may be that several or most of the described species are in fact already extinct.[1]

Spiders in this genus follow the generalized salticid body plan, but differ from other genera by the appearance of the epigyne. The cephalothorax is dark with variable whitish setae ornamentation on the face and some white and yellow scales on the frontal surface of chelicerae and the rim of the eyes. The body length varies from less than two up to ten mm.

Relationship with other genera

The ancestors of modern Havaika species probably reached the Hawaiian islands after most of the recent islands were already formed (about two million years ago), and after many other spiders had already colonized the islands. The speciation does not follow the progression rule typically found in radiated species of Hawaii, where islands were colonized as they formed, creating new species on the way. Today, Havaika represents about four thirds of all salticid species on Hawaii. 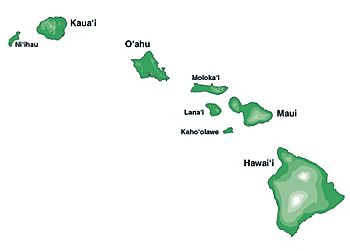 However, it is currently not feasible to group the poorly defined species into these lineages.

In all cases where two species were found on the same island, they significantly differed in size. This makes it likely that the two species hunt for different prey, and thus do not compete with each other. However, it seems that Havaika size differentiation happened soon after arrival on the Hawaiian islands, with subsequent dispersal and further speciation. This is suggested by the observation that the bigger of two sympatric species always belongs to one evolutionary lineage (pubens clade), while the smaller belongs to the other (Arnedo & Gillespie, 2006).

The following 14 species from Hawaii were newly described in 2008, with five further unidentified species:

All content from Kiddle encyclopedia articles (including the article images and facts) can be freely used under Attribution-ShareAlike license, unless stated otherwise. Cite this article:
Havaika Facts for Kids. Kiddle Encyclopedia.