Haysi ( HAY-sye) is a town in Dickenson County, Virginia, United States. The population was 498 at the 2010 census, up from 186 at the 2000 census, over which time period the town's area tripled. The pronunciation of the final syllable is that of "sigh".

Haysi is located at the confluence of Russell Prater Creek, the McClure River, and the Russell Fork river. The area where Haysi is located used to be known as "The Mouth of McClure". As late as 1911, Haysi was only sparsely populated and was often referred to as a laurel bed.

The first store was constructed within the present town limits of Haysi by Paris Charles for workers of the Yellow Popular Lumber Company. Haysi began to grow with the construction of the Clinchfield Railroad between 1912 and 1915 as stores sprang up to serve the railroad workers. The railroad was constructed to export natural resources such as timber and coal from the area, and thus later growth of the town centered on workers for the coal mines which began operating around 1916. However, businesses in the town also accommodated travelers, as the rail system was a popular form of transportation at the time, and Haysi was located on a line of the Clinchfield that linked eastern Kentucky with northeast Tennessee, western North Carolina, and South Carolina. Notable early businesses included the McClure Bottling Company, Inc. (established 1914) and the Haysi Supply Company (established 1916). By 1920 Haysi businesses included a hotel, bank, hardware store, and various other retail merchants. By 1930 Main Street was lined with businesses, and the town was incorporated on February 17, 1936.

Local folklore says that in the pioneer days, prior to the establishment of bridges, a ferry boat operator named Si (Silas) shuttled people across the water in that area. It is said that when one arrived at the river and found the ferry on the opposite bank, it was common to shout "Hey Si!" to capture his attention and request passage. Thus, the town which grew around the location of this ferry service became known as "Haysi".

The myth concerning the town's origins is popular and widely accepted among area residents, but local historians dispute this explanation. The name "Haysi" is said to have originated from a post office established at a general store owned by Otis L. Sifers and Charles M. Hayter. The owners chose Haysi as a blend of their own surnames when it was necessary to provide a name to the U.S. Post Office.

There were 80 households, out of which 26.3% had children under the age of 18 living with them, 48.8% were married couples living together, 16.3% had a female householder with no husband present, and 30.0% were non-families. 30.0% of all households were made up of individuals, and 17.5% had someone living alone who was 65 years of age or older. The average household size was 2.33 and the average family size was 2.84. 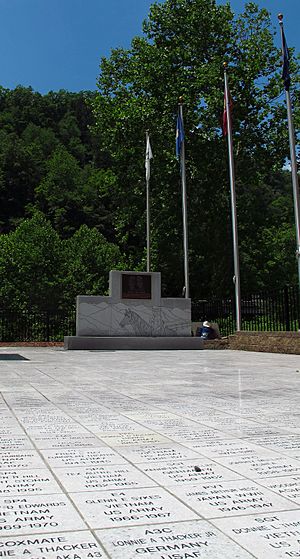 The Haysi area is served by Ridgeview High School and Sandlick Elementary School in the nearby community of Birchleaf, Virginia.

All content from Kiddle encyclopedia articles (including the article images and facts) can be freely used under Attribution-ShareAlike license, unless stated otherwise. Cite this article:
Haysi, Virginia Facts for Kids. Kiddle Encyclopedia.