Hebron is a town in Denton County in the U.S. state of Texas. The population was 415 at the 2010 census.

Hebron was founded in the 1890s and was alternatively known as "Shepton". The land was donated by the Blackland Townsite Company, a subsidiary of the St. Louis and San Francisco Railroad. Historically, the town center was based near the intersection of two railroads, near present-day East Hebron Parkway and 1st Street. Much of that town center has been cleared and developed over.

The town was first incorporated in 1961 as a method to prevent Plano and Carrollton from annexing the territory and imposing taxes. The city of Hebron imposed no taxes of its own, and when the time was ripe for a landowner to develop his land, he would ask the town to disannex that parcel. Hebron's city limits once covered about 25 square miles (65 km2) from the Collin County line west to the Trinity and from the Dallas County line north to State Highway 121. Now it comprises a few plots of land connected with narrow strips and easements, which confuses many maps. Stanley Dozier, the namesake of Dozier Road, was the only mayor of the town between 1961 and 1997. The town is currently managed by a three-person commission with Kelly Clem as the current mayor.

Air Park-Dallas Airport was built as a public civilian airstrip within the city limits in 1965.

For the last 20 years, Hebron has deannexed large portions of its territory to neighboring communities (Lewisville, The Colony, Carrollton, and Plano), to be annexed by those communities instead. The original goal was for Hebron to disappear entirely as an incorporated community, but recently elected leaders have attempted to reverse the situation and allow Hebron to continue as a town. This is partially in response to the city of Carrollton's threatening not to maintain the water supply unless the town is annexed to Carrollton. 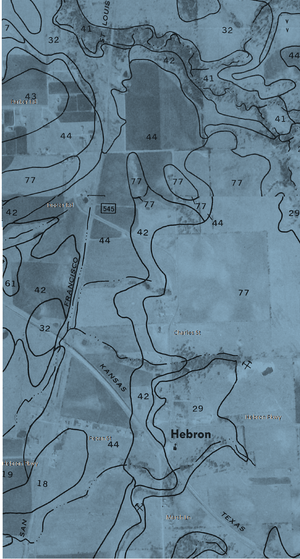 There were 271 households out of which 59.8% had children under the age of 18 living with them, 86.3% were married couples living together, 1.8% had a female householder with no husband present, and 10.3% were non-families. 8.1% of all households were made up of individuals and 1.8% had someone living alone who was 65 years of age or older. The average household size was 3.23 and the average family size was 3.43.

All content from Kiddle encyclopedia articles (including the article images and facts) can be freely used under Attribution-ShareAlike license, unless stated otherwise. Cite this article:
Hebron, Texas Facts for Kids. Kiddle Encyclopedia.