The Colony, Texas facts for kids

The Colony is a city in Denton County, Texas, United States, and a suburb of Dallas. The population was 36,328 at the 2010 census.

The Colony is home to the Five Star Athletic Complex, completed in 2003. The Colony was named the Sports Illustrated 50th Anniversary Sports Town of The United States in that same year. The city is home to Pizza Inn's corporate headquarters, as well as an Edward Don distribution center and a variety of small and medium-sized businesses. The Grandscape development, anchored by Nebraska Furniture Mart, is driving a new development boom in the city.

Located on the southeast side of the city, across Sam Rayburn Tollway from the larger part of the city, is Austin Ranch, a mixed-use development consisting of retail businesses, apartments and condominiums.

The Colony derives its name from the original Peters Colony. The Peters Colony headquarters was located within the current boundaries of The Colony in the historical community of Stewartsville and the site of the Hedgcoxe War. The Colony is also the site of Bridges Settlement (established during the years of the Republic of Texas and the oldest community in Denton County), Stewarts Creek, Rector, Stoverville and Camey, also known as Camey Spur.

The Colony did not exist before 1973, when home developers Fox and Jacobs (since purchased by Centex) purchased land located around State Highway 121 and Farm to Market Road 423. The name "The Colony" was chosen by Fox and Jacobs because they wanted its new development to share a sense of kinship with Texas' early history and "to create a living monument to the spirit and courage of the Peters Colonists ... those men and women who braved considerable hardships to begin new lives, in new homes, on new land." They planned the development to be a new "dream city" consisting primarily of single-family homes grouped as a "colony" and based on the city of Dallas' infrastructure specifications. In 1973, Fox and Jacobs negotiated an agreement with the city of Frisco to begin construction in its extraterritorial jurisdiction. In 1974, street construction began with many streets being named after early settlers and members of the construction crews. The first model homes were completed in August 1974 and the first families moved into their homes in October that year. The homes were served for water services by The Colony Municipal Utility District formed in 1974, electricity via Texas Power and Light, cable television via Lakeside CATV and telephone service via Southwestern Bell.

In 1977, the homeowners associations' petition to disannex the development from the city of Frisco's extraterritorial jurisdiction was approved. The Colony voted to become an incorporated city in January 1977 and a became a Home Rule City in 1979. Residents of The Colony participated in two polls to select a name for the new city. Both polls chose the name "The Colony" and the name was ratified by the City Council in May 1977. In 1987, The Colony voted to merge with the small lakeside community of Eastvale. 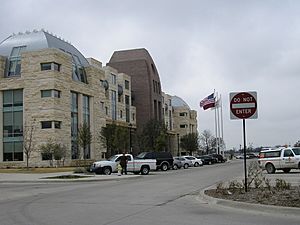 The city is bordered on the west by Lewisville Lake and the city of Lewisville, on the north and east by Frisco, and on the south by the cities of Carrollton and Plano. Approximately 23 miles (37 km) of shoreline on Lewisville Lake (including two peninsulas) are contained within the city's boundaries, thus providing the basis for the city's nickname "City by the Lake."

The Colony is part of the humid subtropical region.

Years of planning work by city leaders have translated into a strong pace of economic and community development in The Colony. Nebraska Furniture Mart broke ground September 25, 2012, on a $1.5 billion, 433-acre complex along State Highway 121 between Plano Parkway and West Spring Creek Parkway. The Omaha-based furniture retailer is owned by Warren Buffett's Berkshire Hathaway, Inc. The complex is anchored by a 1.86 million-square-foot Nebraska Furniture Mart building, and includes a 600,000-square-foot showroom. The footprint for Nebraska Furniture Mart of Texas, which opened in May 2015, is equivalent to 40 football fields and sits on approximately 90 acres. It is a part of the largest retail and entertainment destination of its kind in North America. Nebraska Furniture Mart is expected to attract over 8 million visitors and generate $600 million in sales annually.

Infrastructure projects underway in The Colony include the Main Street/FM 423 Widening Project by the Texas Department of Transportation, encompassing over 10 miles of construction in three cities. Improvements in The Colony involve widening four miles of Main Street from Stewarts Creek Road to State Highway 121. Work should conclude in the last quarter of 2017. Widening of Plano Parkway has been completed, expanding the road from four lanes to six lanes. The Memorial-Spring Creek Connector linking Memorial Drive in The Colony to SH 121 in Plano via a railroad underpass was finished in May 2015. In addition, a new overpass has been constructed to carry South Colony Boulevard over the Sam Rayburn Tollway (SH121) using a first-in-Texas design known as a diverging diamond interchange.

While The Colony is growing, prime space is plentiful with more than 700 acres (280 ha) to develop including State Highway 121 frontage. Mixed use centers include The Cascades at The Colony, a 100-acre master-planned community consisting of 280 residences; flex office space; a Marriott Residence Inn; and a Marriott Fairfield Inn. A Courtyard by Marriott is also under construction. Another mixed use center is Austin Ranch, located west of the Dallas North Tollway and south of State Highway 121. The development has prime sites for corporate campuses, commercial offices, industrial distribution parks, retail strip centers, pad sites, multi-family and single-family homes.

There were 8,462 households out of which 53.7% had children under the age of 18 living with them, 69.7% were married couples living together, 10.4% had a female householder with no husband present, and 15.6% were non-families. 11.4% of all households were made up of individuals and 1.8% had someone living alone who was 65 years of age or older. The average household size was 3.14 and the average family size was 3.41.

All content from Kiddle encyclopedia articles (including the article images and facts) can be freely used under Attribution-ShareAlike license, unless stated otherwise. Cite this article:
The Colony, Texas Facts for Kids. Kiddle Encyclopedia.