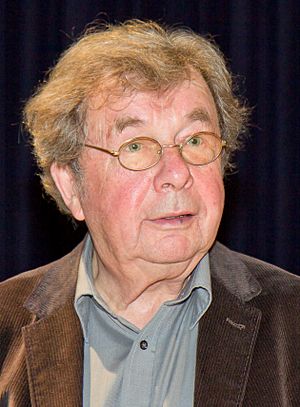 Hellmuth Karasek (4 January 1934 – 29 September 2015) was a German journalist, literary critic and novelist. He wrote over 25 books on literature and movies. He was well known for being on the panel of the show Das Literarische Quartett, with Marcel Reich-Ranicki. In 1968, he became the theatre critic of Die Zeit. From 1974 until 1996, he worked for Der Spiegel. In 1999, he was a member of the jury at the 49th Berlin International Film Festival.

Karasek was born in Brünn, Czechoslovakia (now Brno, Czech Republic). He moved from Bielitz (now Poland) to Bernburg in 1944 during World War II. In the 1950s, he became a student at the University of Tübingen in Tübingen, Baden-Württemberg (then West Germany).

All content from Kiddle encyclopedia articles (including the article images and facts) can be freely used under Attribution-ShareAlike license, unless stated otherwise. Cite this article:
Hellmuth Karasek Facts for Kids. Kiddle Encyclopedia.