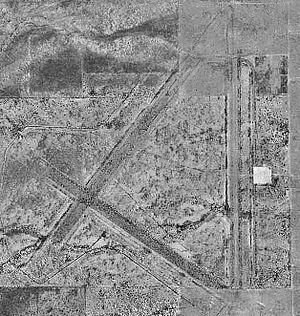 View of Hereford from Miller Canyon

Hereford is an populated place in Cochise County along the San Pedro Riparian National Conservation Area in the southern part of the U.S. state of Arizona. It is southeast of Sierra Vista and is a part of the Sierra Vista-Douglas micropolitan area. The elevation is 4,193 feet at the location of the original townsite at the far eastern end of the unincorporated area; the residential area runs for another 8 miles west from this location, blending into the unincorporated area of Nicksville at an elevation of approximately 4800'. Hereford Station Post Office is located at the far western end of Nicksville, at the foot of the Huachuca Mountains.

The community was named after B.J. Hereford, who was a friend of the town's founder. It was where cowboys Frank McLaury and Tom McLaury first met and became associated with Ike Clanton, in 1878. The two brothers would later be killed during the Gunfight at the O.K. Corral, in Tombstone, Arizona, with Ike Clanton being at the center of that dispute with the Earp faction. The El Paso and Southwestern Railroad, a mining road originally built by Phelps Dodge Mining Corporation, established a siding at the town around 1892, which featured a water tank and stock loading platforms. This line continued on to the wye connection at Fairbank and the New Mexico and Arizona Railroad, and then on to Benson. Hereford was a common stop for travelers heading from Tombstone, 15 miles northwest, down the San Pedro River en route to Naco, Arizona and thence Mexico, approximately 14 miles away. The original townsite was populated until the 1950s, and the last structures disappeared in the early 1960s. Nothing remains of the original townsite except for a few concrete foundations and the ballasted rail bed, the rails and ties having been pulled in 2006.

Also nearby are remains of the former Hereford Army Airfield, a World War II-era training field for light and medium bomber pilots. Little remains other than one concrete pad and traces of the runway tarmac in the bushes. 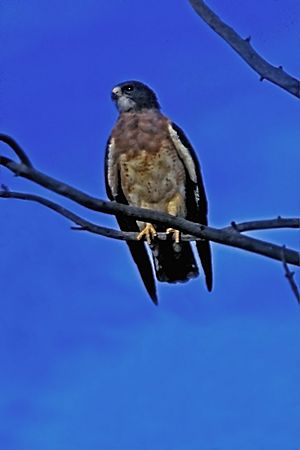 The area is known for its wildlife and outdoor activities. Hundreds of birds and butterflies migrate through this area year round. The entry turnoff to the Coronado National Memorial is located in Hereford. The Lehner Mammoth-Kill Site, a National Historic Landmark, is located nearby.

According to the Köppen Climate Classification system, Hereford has a semi-arid climate, abbreviated "BSk" on climate maps.

All content from Kiddle encyclopedia articles (including the article images and facts) can be freely used under Attribution-ShareAlike license, unless stated otherwise. Cite this article:
Hereford, Arizona Facts for Kids. Kiddle Encyclopedia.