Hexhamshire Moors is a Site of Special Scientific Interest covering an extensive area of moorland in the Wear Valley district of north-west County Durham and the Tynedale district of south-west Northumberland, England.

It is a broadly rectangular area, occupying most of the upland between the valleys of the River East Allen to the west and Devil's Water to the east. The southern part of the site shares boundaries with the Muggleswick, Stanhope and Edmundbyers Commons and Blanchland Moor SSSI to the east and is separated from the Allendale Moors SSSI only by a very narrow strip of the East Allen valley.

The area has one of the largest expanses of blanket bog and heathland in northern England. Acid bogs occur in the vicinity of the numerous flushes that drain the moorland plateau, and localised patches of acid grassland have developed in areas that are regularly grazed by sheep.

Floristically, much of the area is species-poor, but there are small populations of some nationally scarce species, including bog orchid, Hammarbya paludosa, which is found on the blanket peat, and forked spleenwort, Asplenium septentrionale, whose presence at one locality in the Northumberland part of the site is, to date, the only known record for that county. 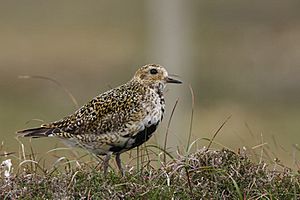 Much of the moorland heath also supports a rich assemblage of invertebrates, including several scarce species of ground beetle, Carabidae.

The site is within the North Pennines Area of Outstanding Natural Beauty.

All content from Kiddle encyclopedia articles (including the article images and facts) can be freely used under Attribution-ShareAlike license, unless stated otherwise. Cite this article:
Hexhamshire Moors Facts for Kids. Kiddle Encyclopedia.