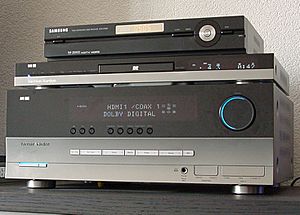 Modular components made by Samsung and Harman Kardon

High fidelity or hi-fi is a way of describing a very good home music system. "High fidelity" means that the sound is as close to the original as possible with no changes or added noise. People who like hi-fi are sometimes called audiophiles. Hi-fi is often now called "high-end audio". 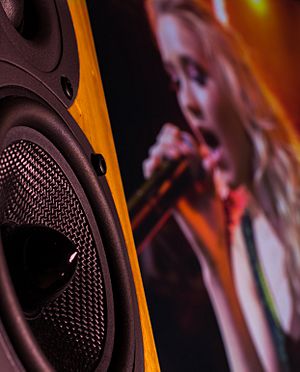 Hi-fi speakers are a key component of quality audio reproduction.

In the 1930s and 1940s, vacuum tubes were used to make radios and electronic amplifiers. Radio was becoming popular, and microphones, amplifiers and loudspeakers began to be sold. Manufacturers began to compete to produce the best product. A lot of research was done at Bell Laboratories and products were made by Western Electric.

Then a new kind of vinyl record with less noise and better sound was invented. Manufacturers began to call their equipment and records "high fidelity" to help sell them. In the 1950s, "hi-fi" became the popular term, replacing "phonograph" and "record player". Rather than playing a record "on the phonograph," people would play it "on the hi-fi".

In the late 1950s and early 1960s, Westrex invented the stereo record that used two speakers. This led to more improvements in home audio. The word "stereo" replaced the word "hi-fi." Records were now played on "a stereo".

Some people bought individual parts (separate speakers and amplifiers), and even built their own equipment. The term "high fidelity" is still used for very good music systems.

All content from Kiddle encyclopedia articles (including the article images and facts) can be freely used under Attribution-ShareAlike license, unless stated otherwise. Cite this article:
High fidelity Facts for Kids. Kiddle Encyclopedia.