Hicksville is a hamlet and census-designated place (CDP) located within the Town of Oyster Bay in Nassau County, New York, United States, on Long Island. The population of the CDP was 41,547 at the 2010 census.

Valentine Hicks, son-in-law of nationally famous abolitionist and Quaker preacher Elias Hicks, and eventual president of the Long Island Rail Road, bought land in the village in 1834 and turned it into a station stop on the LIRR in 1837. The station became a depot for produce, particularly cucumbers for a Heinz Company plant. After a blight destroyed the cucumber crops, the farmers grew potatoes. It turned into a bustling New York City suburb in the building boom following World War II.

Metalab, Equipment Company, a division of Norbute Corp, made laboratory furniture and cabinetry. Alsy Manufacturing manufactured electric lamps and lampshades from 1975 through 1991.

The Rubber Company of America (RUCO) built a manufacturing site in 1945. RUCO Polymer Corp. (Hooker Chemical Company) manufactured plastics, latex, and esters. Occidental Chemical Corporation (OCC) owned and operated this site from 1966 to 1982. The site was purchased by Sybron Corporation, then in 2000, the Bayer Corporation (Bayer MaterialScience) purchased the Hooker Ruco facility and in 2002 decided to close the facility. The site was used for the production of polyester from 1982 until 2002. 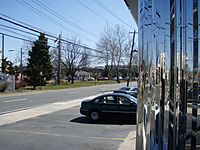 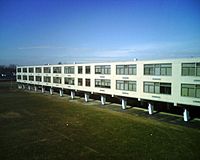 A Little India has developed in Hicksville.

Hicksville is a major hub on the Long Island Rail Road, where the Ronkonkoma Branch meets with the Port Jefferson Branch to form the Main Line. The area is also a hub for the following routes operated by Nassau Inter-County Express:

All content from Kiddle encyclopedia articles (including the article images and facts) can be freely used under Attribution-ShareAlike license, unless stated otherwise. Cite this article:
Hicksville, New York Facts for Kids. Kiddle Encyclopedia.