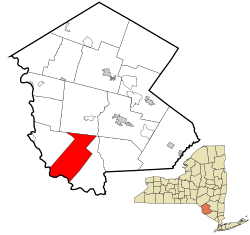 Highland is a town in Sullivan County, New York, United States. The population was 2,530 at the 2010 census. The town's name notes its location on elevated ground north of the Delaware River. The town is in the southwest part of the county. 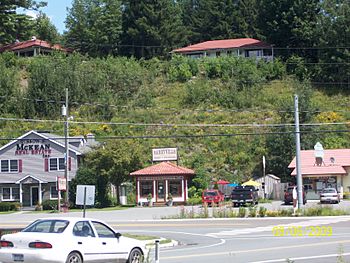 Intersection of Routes 55 and 97 in Barryville.

The town was formed from the Town of Lumberland in 1853. Barryville is named for William T. Barry, postmaster general under President Andrew Jackson. The community grew up around the D&H Canal, which opened in 1828 and operated until 1898. The canal ran through what is today the center of the hamlet, and the canal company operated a number of stores, an office and a dry dock there.

The Delaware River also served as the conduit for timber cut in the area and rafted to Philadelphia for use in the ship building industry. Men made fortunes in the timber business, and when the industry died in the middle of the 19th century, many river communities died with it. In fact, writing in 1899, John Willard Johnston, lawyer, historian, and the town of Highland’s first supervisor, predicted a dire future for Barryville.

"Barryville is a small, poor village now," he wrote, "but at one time supported an active business. The lumber of the region being exhausted, the business of canaling declining and now abandoned, it has for the last 25 years been waning, until now it seems to have reached a bottom of hardpan. Human imagination can hardly reach anything in the future likely to improve it; but it will probably remain indefinitely the small poor place it now is."

The southwest town line, marked by the Delaware River, is the border of Pennsylvania.

There were 951 households out of which 28.8% had children under the age of 18 living with them, 56.3% were married couples living together, 7.8% had a female householder with no husband present, and 32.0% were non-families. 28.6% of all households were made up of individuals and 12.1% had someone living alone who was 65 years of age or older. The average household size was 2.38 and the average family size was 2.89.

Communities and locations in Highland

All content from Kiddle encyclopedia articles (including the article images and facts) can be freely used under Attribution-ShareAlike license, unless stated otherwise. Cite this article:
Highland, Sullivan County, New York Facts for Kids. Kiddle Encyclopedia.