The Hinton St Mary Mosaic is a large, almost complete Roman mosaic discovered at Hinton St Mary, Dorset, England. It appears to feature a portrait bust of Jesus Christ as its central motif. The mosaic was chosen as Object 44 in the BBC Radio 4 programme A History of the World in 100 Objects, presented by British Museum director Neil MacGregor.

The mosaic covered two rooms, joined by a small decorated threshold. It is largely red, yellow and cream in colouring. On stylistic grounds it has been dated to the 4th century and is attributed to the mosaic workshop of Durnovaria (modern Dorchester). It is currently in storage at the British Museum, although the central medallion is on display there. 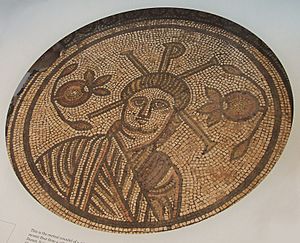 The panel in the larger room is 17 by 15 feet (5.2 by 4.6 m). A central circle surrounds a portrait bust of a man in a white pallium standing before a Christian chi-rho symbol flanked by two pomegranates. He is generally identified as Christ, although the Emperor Constantine I has also been suggested despite the absence of any insignia or identifiers pointing to a particular emperor other than the chi-rho. On each side of this are four lunettes, each featuring conventional forest and hunting vignettes, mostly of a dog and a deer. In the corners are four quarter circles containing portrait busts, either representing the winds or the seasons.

The panel in the smaller room is 16 1⁄2 by 8 feet (5.0 by 2.4 m). It consists of a central circle containing an image of characters from Roman mythology, Bellerophon killing the Chimera. This has been interpreted in a more Christian context as representing good defeating evil. Flanking this are two rectangular panels again featuring dogs hunting deer.

The mosaic was discovered on 12 September 1963 by the local blacksmith, Walter John White. It was cleared by the Dorset County Museum and lifted for preservation by the British Museum, although none of the rest of the building has been examined. It is generally assumed to have been a villa. The layout of the mosaic room certainly resembles a Roman triclinium, or dining room. However, it might easily be a church or other Christian complex. There were no finds dated earlier than c. 270.

In 2000 a new roof was erected by architects Foster and Partners to cover the previously open courtyard of the British Museum. As part of this major building work it was decided that the Hinton St Mary mosaic should be moved. The mosaic, which was fixed to the museum floor was levered up and broken onto pieces. The pieces are now stored in boxes in the museum vaults with only the central Christian portrait on display in the Gallery.

All content from Kiddle encyclopedia articles (including the article images and facts) can be freely used under Attribution-ShareAlike license, unless stated otherwise. Cite this article:
Hinton St Mary Mosaic Facts for Kids. Kiddle Encyclopedia.