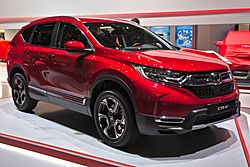 The Honda CR-V is a compact SUV, manufactured since 1997 by Honda. It was loosely based on the Honda Civic. It debuted in Japan in 1996.

In 1997 the five-passenger compact utility vehicle was introduced in North America. At first it was available only as a four-wheel drive model. It was powered by a 126-horsepower 2.0-liter four-cylinder engine. Honda first began producing the CR-V in Sayama, Japan, and Swindon, UK, for worldwide markets. It added North American manufacturing sites in East Liberty, Ohio, in 2007; El Salto, Jalisco, Mexico, in late 2007; and Alliston, Ontario, Canada, in 2012.

The CR-V also is produced in Wuhan (Hubei province) for the Chinese market by the Dongfeng Honda Automobile Company. They are a joint venture with Dongfeng Motor Corporation. The CR-V is Honda's second smallest utility vehicle, slotting between the smaller HR-V and the larger Pilot. In 2015 the CR-V was named Motor Trend SUV of the year.

All content from Kiddle encyclopedia articles (including the article images and facts) can be freely used under Attribution-ShareAlike license, unless stated otherwise. Cite this article:
Honda CR-V Facts for Kids. Kiddle Encyclopedia.