Hopatcong State Park is a state park in the Landing section of Roxbury Township, New Jersey. Operated and maintained by the New Jersey Division of Parks and Forestry, the park consists of two discrete parcels of land, one that encompasses Lake Hopatcong and a parcel of land on its southwestern shore, and another that encompasses Lake Musconetcong about one mile to the west-southwest.

The park contains remnants of Morris Canal, which operated from the 1830s to the 1920s and was largely fed by the lake. The park is also home to the Lake Hopatcong Historical Museum, open Sundays during spring and fall, and housed in what was once the home of the resident lock tender and his family.

Swimming is permitted in the park from Memorial Day through Labor Day while lifeguards are on duty.

Subject to NJDEP regulations, there is year-round fishing at Lake Hopatcong and Lake Musconetcong, which are stocked by New Jersey Division of Fish and Wildlife stocks them with brown trout, rainbow trout and brook trout. Commonly caught warmwater species include large mouth bass, sunfish, catfish, perch and pickerel. During the winter, ice fishing is allowed (conditions permitting).

Lake Hopatcong allows boating in canoes, large motor boats, sailboats, sailboards and jet skis. Boats are available for rent at many private marinas around the lake. Boating is subject to New Jersey Boating Regulations and Marine Law. There is a boat ramp in the park itself.

The park has two playgrounds, two half-basketball courts, sand volleyball, and a large playing field for field sports. There are several picnic areas in the park with grills and tables. Local children have been known to use the hill for winter sledding. 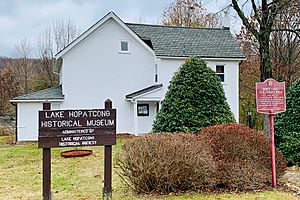 The Lake Hopatcong Historical Museum was originally the Lock Tender's House, built in c. 1825, on the feeder canal for the Morris Canal. The museum has collections on the history of Lake Hopatcong, with emphasis on transportation and entertainment. 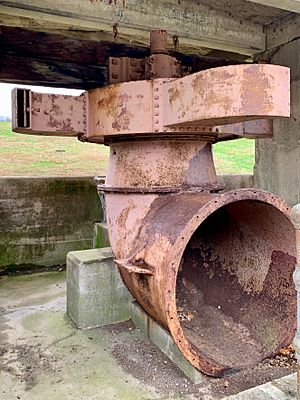 In addition to the lock tender's house, the park has a display of the technology used by the Morris Canal to power its inclined planes. The Scotch Turbine, a type of reaction turbine, from Inclined Plane 3 East, formerly at Ledgewood, was brought here in 1926 as the canal was being decommissioned.

All content from Kiddle encyclopedia articles (including the article images and facts) can be freely used under Attribution-ShareAlike license, unless stated otherwise. Cite this article:
Hopatcong State Park Facts for Kids. Kiddle Encyclopedia.