A Horse fly is a type of insect and a member of the family Tabanidae (order Diptera), but more specifically are any member of the genus Tabanus. These stout flies, as small as a housefly or as large as a bumblebee, are sometimes known as greenheaded monsters; their metallic or iridescent eyes meet dorsally in the male and are separate in the female. Gad fly, a nickname, may refer either to the fly’s roving habits or to its mouthparts, which resemble a wedge-shaped miner’s tool. 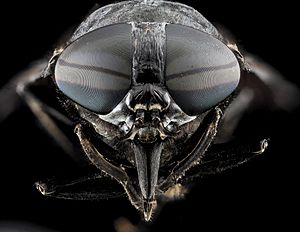 Head of Tabanus atratus showing large compound eyes, short antennae (between and below the eyes) and stout piercing mouthparts

Adult tabanids are large flies with prominent compound eyes, short antennae composed of three segments, and wide bodies. In females, the eyes are widely separated but in males they are almost touching; they are often patterned and brightly coloured in life but appear dull in preserved specimens. The terminal segment of the antennae is pointed and is annulated, appearing to be made up of several tapering rings. There are no hairs or arista arising from the antennae. Both head and thorax are clad in short hairs, but no bristles are on the body. The membranous forewings are clear, uniformly shaded grey or brown, or patterned in some species; they have a basal lobe (or calypter) that covers the modified knob-like hindwings or halteres. The tips of the legs have two lobes on the sides (pulvilli) and a central lobe or empodium in addition to two claws that enable them to grip surfaces. Species recognition is based on details of head structures (antennae, frons, and maxillae), the wing venation and the body patterning; minute variations of surface structure cause subtle alterations of the overlying hairs which alters the appearance of the body.

Tabanid species range from medium-sized to very large, robust insects. Most have a body length between 5 and 25 mm (0.2 and 1.0 in), with the largest having a wingspan of 60 mm (2.4 in). Deer flies in the genus Chrysops are up to 10 mm (0.4 in) long, have yellow to black bodies and striped abdomens, and membranous wings with dark patches. Horse-flies (genus Tabanus) are larger, up to 25 mm (1 in) in length and are mostly dark brown or black, with dark eyes, often with a metallic sheen. Yellow flies (genus Diachlorus) are similar in shape to deer flies, but have yellowish bodies and the eyes are purplish-black with a green sheen. Some species in the subfamily Pangoniinae have an exceptionally long proboscis (tubular mouthpart).

The larvae are long and cylindrical with small heads and 12 body segments. They have rings of tubercles (warty outgrowths) known as pseudopods around the segments, and also bands of short setae (bristles). The posterior tip of each larva has a breathing siphon and a bulbous area known as Graber's organ. The outlines of the adult insect's head and wings are visible through the pupa, which has seven moveable abdominal segments, all except the front one of which bears a band of setae. The posterior end of the pupa bears a group of spine-like tubercles. 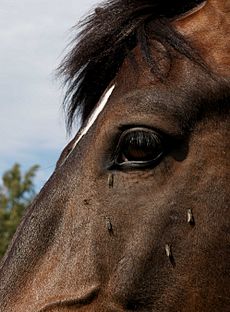 Some species, such as deer flies and the Australian March flies, are known for being extremely noisy during flight, though clegs, for example, fly quietly and bite with little warning. Tabanids are agile fliers; Hybomitra species have been observed to perform aerial manoeuvres similar to those performed by fighter jets, such as the Immelmann turn. Horseflies can lay claim to being the fastest flying insects; the male Hybomitra hinei wrighti has been recorded reaching speeds of up to 145 km (90 mi) per hour when pursuing a female.

Horse-flies are found worldwide, except for the polar regions, but they are absent from some islands such as Greenland, Iceland, and Hawaii. The genera Tabanus, Chrysops, and Haematopota all occur in temperate, subtropical, and tropical locations, but Haematopota is absent from Australia and South America. Horse-flies mostly occur in warm areas with suitable moist locations for breeding, but also occupy a wide range of habitats from deserts to alpine meadows. They are found from sea level to at least 3,300 m (10,800 ft).

Adult horse-flies feed on nectar and plant exudates, and some are important pollinators of certain specialised flowers; several South African and Asian species in the Pangoniinae have spectacularly long probosces adapted for the extraction of nectar from flowers with long, narrow corolla tubes, such as Lapeirousia, and certain Pelargonium.

Both males and females engage in nectar feeding, but in addition to this, females of most species are anautogenous, meaning they require a blood meal before they are able to reproduce effectively. To obtain the blood, the females bite animals, including humans, while the males are harmless. The female needs about six days to fully digest her blood meal and after that, she needs to find another host. The flies seem to be attracted to a potential victim by its movement, warmth, and surface texture, and by the carbon dioxide it breathes out. The flies mainly choose large mammals such as cattle, horses, camels, and deer, but few are species-specific. They have also been observed feeding on smaller mammals, birds, lizards, and turtles, and even on animals that have recently died. Because their bite is irritating to the victim, they are often brushed off, and may have to visit multiple hosts to obtain sufficient blood. This behaviour means that they may carry disease-causing organisms from one host to another. 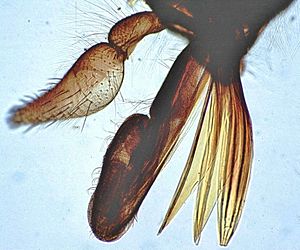 Tabanus mouthparts: The sharp cutting stylets are on the right, the spongelike lapping part in the centre.

The mouthparts of females are of the usual dipteran form and consist of a bundle of six chitinous stylets that, together with a fold of the fleshy labium, form the proboscis. On either side of these are two maxillary palps. When the insect lands on an animal, it grips the surface with its clawed feet, the labium is retracted, the head is thrust downwards and the stylets slice into the flesh. Some of these have sawing edges and muscles can move them from side-to-side to enlarge the wound. Saliva containing anticoagulant is injected into the wound to prevent clotting. The blood that flows from the wound is lapped up by another mouthpart which functions as a sponge. Horse-fly bites can be painful for a day or more; fly saliva may provoke allergic reactions such as hives and difficulty with breathing. Tabanid bites can make life outdoors unpleasant for humans, and can reduce milk output in cattle. They are attracted by reflections from water which are polarized, making them a particular nuisance near swimming pools. Since tabanids prefer to be in sunshine, they normally avoid shaded places such as barns, and are inactive at night.

Attack patterns vary with species; clegs fly silently and prefer to bite humans on the wrist or bare leg; large species of Tabanus buzz loudly, fly low, and bite ankles, legs, or backs of knees; Chrysops flies somewhat higher, bites the back of the neck, and has a high buzzing note. The striped hides of zebras may have evolved to reduce their attractiveness to horse-flies and tsetse flies than either plain dark or plain white hides. The closer together the stripes, the fewer flies are visually attracted; the zebra's legs have particularly fine striping, and this is the shaded part of the body that is most likely to be bitten in other, unstriped equids. This does not preclude the possible use of stripes for other purposes such as signaling or camouflage.

Humans find horse-fly bites painful. Usually, a weal (raised area of skin) occurs around the site, and other symptoms may include urticaria (a rash), dizziness, weakness, wheezing, and angioedema (a temporary itchy, pink or red swelling occurring around the eyes or lips); a few people experience an allergic reaction. The site of the bite should be washed and a cold compress applied. Scratching the wound should be avoided and an antihistamine preparation can be applied. In most cases, the symptoms subside within a few hours, but if the wound becomes infected, medical advice should be sought.

All content from Kiddle encyclopedia articles (including the article images and facts) can be freely used under Attribution-ShareAlike license, unless stated otherwise. Cite this article:
Horse fly Facts for Kids. Kiddle Encyclopedia.