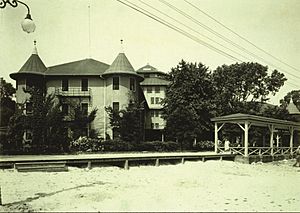 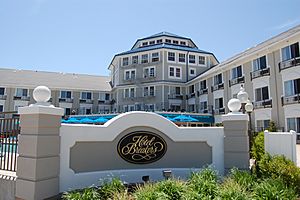 George A. Boeckling, then general manager of Cedar Point, believed that the longer guests stayed at Cedar Point, the more profitable the resort would be. The park's two hotels at that time, the 20-room Bay Shore Hotel and the 125-room White House Hotel, were having trouble meeting the demands of overnight visitors. So, Boeckling made plans to build a massive hotel on the resort's beach. Keeping with Boeckling's vision of Cedar Point as the "Queen of American Watering Places", he set out to build the resort's grandest hotel. The Hotel Breakers opened on June 12, 1905, featuring 600 rooms, most with a view of Lake Erie. Each room included running water and one hundred had private baths, a rarity for hotels at that time. The hotel's Breakers Cafe seated 400 guests. The hotel was designed by the Knox & Elliott architectural firm and was influenced by chateaus Boeckling had seen while traveling in France.

The hotel's lobby featured round seats, which remain a Cedar Point tradition. The ceiling was elaborate pressed tin and included chandeliers crafted by Tiffany artists. The hotel's original amenities included imported wicker furniture, large brass beds, a manicurist, a medical doctor, a tailor, a stenographer, a barbershop, news stand, ice cream parlor and souvenir counter. Adjacent to the lobby was a four-story rotunda featuring four tiers of balconies, which remains in the hotel. Singers from the Metropolitan Opera gave impromptu performances in the rotunda from their balconies during the 1910s and 1920s.

Cedar Point announced a two-year renovation of the hotel would begin in 2013. The renovations include repainting the hotel, replacing its roof, and a remodel of the interior in the off-season after summer 2014. The renovations are the largest cost project ever at Cedar Point.

In 2018, the Bon Air wing of the hotel was replaced with a new 6 story tower (Breakers West) designed in the same style as the original resort, but with modern amenities and connecting rooms for families, as well as its own outdoor pool and jacuzzi.

The hotel sits on the one mile beach mentioned on Cedar Point's web page. There are 511 rooms and suites with a small portion with a Peanuts comic theme. The hotel has two outdoor pools and one indoor pool, each with a hot tub nearby. The hotel contains a conference center, shops including Tommy Bahama, and several restaurants including T.G.I. Friday's and Perkins Restaurant.

The 2014-2015 remodel replaced the dinner restaurant with a Japanese teppanyaki and sushi restaurant, a new lobby bar, an in house Starbucks, a dedicated Dominos pizza delivery kitchen, as well as a new beach bar.

All content from Kiddle encyclopedia articles (including the article images and facts) can be freely used under Attribution-ShareAlike license, unless stated otherwise. Cite this article:
Hotel Breakers Facts for Kids. Kiddle Encyclopedia.