Houghton was named after the town of Houghton-le-Spring, Durham, England.

The 162-hectare Highercombe estate was settled by George Anstey in 1841, who named it after his original family home near Dulverton, Somerset. The present-day Highercombe golf course south of the townsite was part of this estate. In 1857, the house, now with sixteen rooms, and estate was purchased by George Waterhouse, who became Premier of South Australia in 1861. In 1929, it was burnt in a fire, but was rebuilt on a smaller scale.

The townsite itself was also settled in 1841, by land agent and auctioneer John Richardson. During the 1840s, it was the hub of the district and gained a simple stone Union Chapel serving several denominations, the Travellers' Rest Hotel, blacksmith, school, dwellings and other trappings of civilisation, together with a reserve which is now Houghton Common.

Houghton is located between Tea Tree Gully and Inglewood at the intersection of North East Road and Lower North East Road. The ABS 2001 census found 438 people living in 151 dwellings.

The area has a few small shops, the Highercombe Golf Course, and a primary school (which has now closed due to lack of numbers) and oval. It backs onto the Anstey Hill Recreation Park which is accessible from nearby Vista. 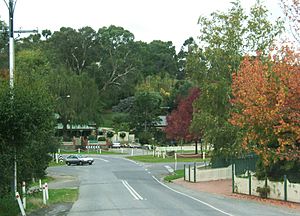 All content from Kiddle encyclopedia articles (including the article images and facts) can be freely used under Attribution-ShareAlike license, unless stated otherwise. Cite this article:
Houghton, South Australia Facts for Kids. Kiddle Encyclopedia.