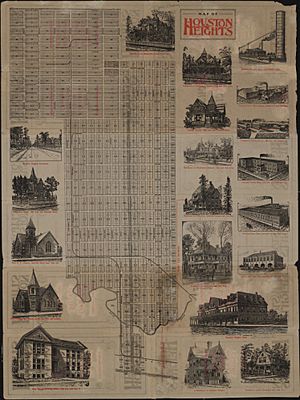 Map of Houston Heights, circa 1890

By 1891 millionaire Oscar Martin Carter and a group of investors established the Omaha and South Texas Land Company. The company purchased 1,756 acres (7.11 km2) of land and established infrastructure, including alleys, parks, schools, streets and utilities, worth $500,000 United States dollars. When Houston Heights was founded, it was a streetcar suburb of Houston which attracted people who did not wish to live in the dense city. It had its own municipality until the City of Houston annexed the Heights in 1919.

Since the 1990s, and similar to other parts of Houston inside the 610 Loop, the Heights has experienced gentrification, a process ongoing to this day, as young highly paid professionals (many of whom work in Downtown Houston) have flocked to the area, purchasing and renovating some of the historic homes (and demolishing some of them to build newer, upscale housing). Upscale boutiques and restaurants have opened in the area, giving the streetscape an appearance not too much unlike Bellaire, Lower Westheimer or Upper Kirby.

In 2013 CNN Money ranked the Houston Heights as no. 4 in its Top 10 big city neighborhoods ranking.

The Houston Heights, one of the earliest planned communities in Texas, is located 4 miles (6.4 km) northwest of Downtown Houston. A National Geographic article says "stroll the area's broad, tree-canopied esplanades and side streets dotted with homes dating from the early 1900s and you may think you've landed in a small town." John Nova Lomax said that the Heights, which he describes as "Houston's own mini-Austin," had many "low-key" restaurants and beer gardens. The Houston Heights Association describes the Heights as being bounded by Interstate 10 on the south, North Shepherd Drive on the west, Interstate 610 on the north and both North Main and Studewood Streets on the east.

According to a study of the University of Houston Institute of Regional Forecasting and Crawford Realty Advisors, from 2002 to 2003 prices of single family houses appreciated by 8.7 percent. Anjali Athavalley said "[r]eal estate agents say most houses there costing less than $200,000 need serious work" and "[b]uying a single-family house in the Houston Heights, for example, is getting expensive."

In 1976 James Conaway of the Texas Monthly described the Heights as a "seedy, lower-middle-class enclave with horizons limited to once-fashionable homes divided into low-rent apartments, and guarded by pickups on concrete blocks."

The paper "Houston Heights" by Carolee Gearheart of the Aspen Systems Corporation - Housing Research Group and three University of Houston professors describe the Houston Heights as having a "diverse population." A National Geographic article said that the Houston Heights "is said to be home to the highest concentration of professional artists" in Texas.

According to the 2000 census, the current population of the Super Neighborhood #15 Greater Heights, which includes the Houston Heights and several surrounding subdivisions [1] [2], is 41,486.

This is the age breakdown of Super Neighborhood #15 Greater Heights. 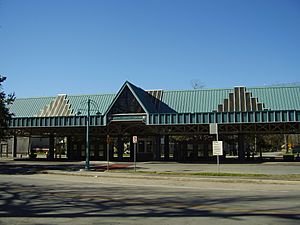 Bike Trails : The MKT/SP Trail is a Rails-to-Trails conversion project of 4.62 miles made up of a 10-foot wide, concrete, multi-use hike and bike trail along the old Missouri, Kansas, Texas Southern Pacific railroad right-of-way.

The trail runs from 26th Street to 7th Street along Nicholson, and from Shepherd along 7th Street, to Spring Street, across White Oak Bayou, and under I-45, where it connects to the Heritage Corridor West Trail providing a connection to the University of Houston and other downtown bikeways and destinations.

A National Geographic Traveler article stated that the Houston Heights "maintains a quirky sense of individuality" and "flourishes as a destination for foodies, architecture buffs, and creative types."

Doug's Barbershop on 11th Street was featured in the 1998 film Rushmore, directed by Wes Anderson. Doug's has also been featured in various television and print advertisements due to its classic barbershop decor. 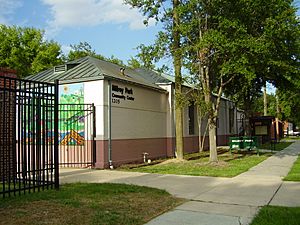 The Heights is the locale of Houston's White Linen Night, held annually in late July or early August. 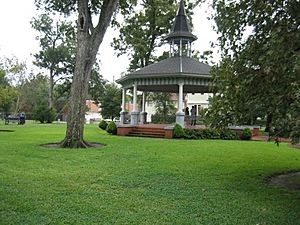 The Houston Heights Woman's Club was founded in 1900, and constructed its own club building in 1912, which is still in use. Members were active in the suffrage movement, and later, during both World Wars volunteered the club for use by the Red Cross. Today the club volunteers in efforts to improve the Heights neighborhood, in particular mentoring children and assisting the elderly. 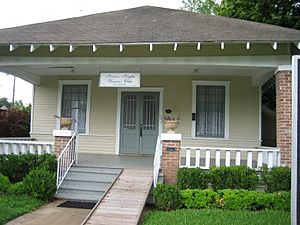 The climate in this area is characterized by hot, humid summers and generally mild to cool winters. According to the Köppen Climate Classification system, Houston Heights has a humid subtropical climate, abbreviated "Cfa" on climate maps.

All content from Kiddle encyclopedia articles (including the article images and facts) can be freely used under Attribution-ShareAlike license, unless stated otherwise. Cite this article:
Houston Heights Facts for Kids. Kiddle Encyclopedia.