Houstonia longifolia, commonly known as long-leaved bluet or longleaf summer bluet, is a perennial plant in the family Rubiaceae. It can be found throughout most of the Eastern United States and Canada. It has been reported from every state east of the Mississippi River except Delaware, plus North Dakota, Minnesota, Missouri, Arkansas and Oklahoma, with isolated populations in Kansas and Texas. Also, all Canadian provinces from Quebec to Alberta. It prefers upland woods in poor, dry, often sandy soil, blooming from June to August. 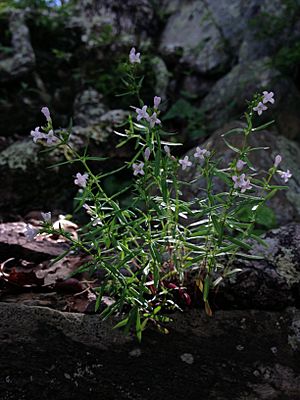 All content from Kiddle encyclopedia articles (including the article images and facts) can be freely used under Attribution-ShareAlike license, unless stated otherwise. Cite this article:
Houstonia longifolia Facts for Kids. Kiddle Encyclopedia.