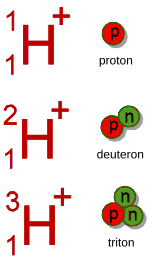 In chemistry a proton is a positively charged hydrogen ion. According to IUPAC, the name hydron should be used for such a particle. In this sense, a hydron can be a proton in the sense of physics, a deuteron or a triton. A deuteron is the ion of deuterium, a triton that of tritium. (So chemists use the term hydron because it covers all three hydrogen ion isotopes.) In 1923, Johannes Nicolaus Brønsted and Thomas Lowry used hydrons to describe acids and bases. They defined acids as proton donors and bases as proton acceptors.

All content from Kiddle encyclopedia articles (including the article images and facts) can be freely used under Attribution-ShareAlike license, unless stated otherwise. Cite this article:
Hydron Facts for Kids. Kiddle Encyclopedia.