Ian Russell McEwan CBE, FRSA, FRSL (born 21 June 1948), is an English novelist (who is also called "Ian Macabre" because of the type of his early work).

McEwan was born in Aldershot, Hampshire, England and spent much of his childhood in the Far East, Germany and North Africa where his father, an officer in the army, was posted. He was educated at the University of Sussex and the University of East Anglia, where he was the first graduate of Malcolm Bradbury's pioneering creative writing course.

He has been married twice. His second wife, Annalena McAfee, is the editor of the Guardian's Review section.

In March and April of 2004, just months after the British government had invited him to a dinner with First Lady of the United States Laura Bush, McEwan was denied entry into the United States by the United States Department of Homeland Security for not having the proper visa for earning a living (McEwan was preparing to give a series of paid lectures). Only after several days and publicity in the British press was McEwan admitted because, as he said a customs official had told him, "We still do not want to let you in, but this is attracting a lot of unfavourable publicity."

His first published work was the collection of short stories First Love, Last Rites (1975), which won the Somerset Maugham Award in 1976.

His 1997 novel, Enduring Love, about a person with de Clerambault's syndrome, is regarded by many as a masterpiece, though Atonement has received equally high acclaim.

In 1998, he was controversially awarded the Booker Prize for his novella, Amsterdam.

His 2005 novel, Saturday, follows an especially eventful day in the life of a neurosurgeon. Mr Henry Perowne, the main character, lives in a house on a square in central London where McEwan himself lives after relocating from Oxford.

The 2007 novel, On Chesil Beach, was a short novel about one couple in England and how they experience love and sexuality in the early 1960s. The novel was on the short list of possible Booker Prize winners.

His most recent novel, Solar, is a comedy. A fictional Nobel Prize winning physicist with a disorganized personal life is the main character. 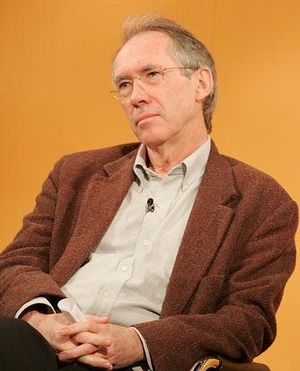 All content from Kiddle encyclopedia articles (including the article images and facts) can be freely used under Attribution-ShareAlike license, unless stated otherwise. Cite this article:
Ian McEwan Facts for Kids. Kiddle Encyclopedia.