The island is home to the ruins of St. Diarmaid’s Monastery, a monastery founded by Diarmaid the Just in AD 560. These buildings constitute a National Monument.

Inchcleraun is an island of 57.7 ha (143 acres) located in the centre of Lough Ree, with Knockcroghery, County Roscommon to its west and Newtowncashel, County Longford to its east.. 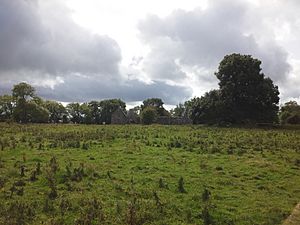 The island takes its name from Irish for "Clothru's Island". In Irish legend, Clothru was a daughter of Eochu Feidlech, then High King of Ireland. She became the Queen of Connacht after her father’s death, and once owned the island. Her sister, Medb, retired to Inchcleraun after Medb's husband Ailill mac Máta killed her lover Fergus mac Róich. One point is called Grianan Meva ("Medb's sunny place"), and nearby is Innadmarfa Meva (Ionad Marbhtha Meidhbhe, "Place of Medb's death"), where she was killed by a stone thrown from Elfeet Castle, on the Longford side of the lake. In other versions of the legend, it is a lump of cheese fired from a slingshot by a nephew of Clothru.

The name "Quaker Island" is more recent, and owes to the island being owned at one time by a Quaker. The island is today owned by the Irish state.

A monastery founded by Saint Diarmaid the Just in 540 AD is the most prominent ruin. Diarmaid was a teacher of Ciarán of Clonmacnoise.

This monastery is by far the most important ruin on the island. The church consists of a single nave 14.5 m (48 ft) long and 6.5 m (21 ft) wide. The walls are about 4 m (13 ft) high. There are two graceful lancet windows at the east end which are long, narrow and well recessed.

The windows on the south side have the appearance of later additions and are unsymmetrical. All traces of doors have vanished, but the opes, which have been arched and protected by the Board of Works, seem to indicate the position of a west door and an entrance on the north side to the cloister. An upper chamber exists and when perfect, covered the Chapter-house sacristy, and the east cloister, the internal walls of the lower apartments forming intermediate supports for the flooring. The interior walls of the church were once plastered.

John O'Donovan referred to this building as two churches: the monastic apartments as one and the vaulted sacristy as a penitential prison, labelling it "Deartheach".

The largest church. According to local lore, any woman who enters Templemurray will die within a year.

One of the churches, crowning the highest point of the island. has a square bell tower (Irish: clogas), which is attached to the main building, which is . Most churches of this era had round towers, separate from the main building. It is located on the northern part of the island and is visible from the shoreline. On the plan the church is rectangular, being 10.6 m (35 ft) by 5.1 m (17 ft).

All content from Kiddle encyclopedia articles (including the article images and facts) can be freely used under Attribution-ShareAlike license, unless stated otherwise. Cite this article:
Inchcleraun Facts for Kids. Kiddle Encyclopedia.