Inglewood is a town situated on the southern Darling Downs in Queensland, Australia, 150 km (93 mi) south-west of Toowoomba. Inglewood is the second largest town in the Goondiwindi Region as well as being part of the Border Rivers region of waterways.

The town was the council seat of the former Shire of Inglewood until its amalgamation to form part of the larger Goondiwindi Region.

The current slogan for the town is 'Catch the country spirit'. 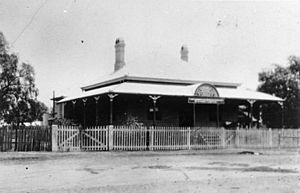 English botanist and explorer Allan Cunningham has been credited with being the first European to discover the Inglewood area. He passed through east of the present township in May 1827. The first settlement in the area was known as Browns Inn and was an important watering point for bullock teams moving west. The inn opened in the late 1850s on the south side of Macintyre Brook, and in 1862 a town was surveyed on the higher, northern side. Plans were drawn up for the present site and the name changed to Inglewood. Inglewood Post Office opened on 16 September 1866. Most of the hinterland consisted of station holdings which were selected as early as 1848 and were the start of the wool, cattle and wheat base of the region. A school was opened in 1872 and a hospital was built in 1921. Anglican, Catholic and Presbyterian churches opened in 1894, 1902 and 1906 respectively. 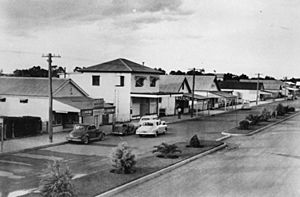 In 1907 Inglewood was connected by Rail transport|rail to Warwick, and westward to Goondiwindi by the South Western railway line. Nine years later Inglewood became a rail junction when the line to Texas was opened. It carried freight, including fuel to, and ore from, the Silverspur mine east of Texas. The Texas rail line was closed in 1994, due to lack of passengers and the usage of trucks to move freight. Local dairying was served by a branch factory of the Warwick Co-operative between 1940 and 1960.

In 1925, Pugh's Queensland Directory recorded four hotels in Inglewood, two sawmills, a picture show and several other stores and tradespeople.

On 16 February 1922, the Inglewood War Memorial was dedicated by the Member of the Queensland Legislative Assembly for the Carnarvon, Major Edward Costello, as part of at the official opening of the Inglewood Memorial Hospital.

The town sits midway between the larger centres of Warwick and Goondiwindi on the Cunningham Highway. The confluence of the Macintyre Brook and Canning Creek is sited just north of Inglewood, with the brook running 270° around the town. Olive growing is a comparatively new industry in the area. Other established industries include sheep and cattle raising, grain growing and timber harvesting. Tobacco growing was common around Inglewood over the last 60 years. 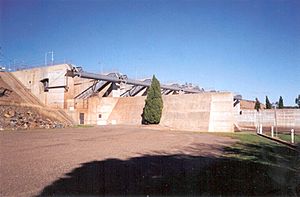 Lake Coolmunda provides water for Inglewood and irrigators as far downstream as Goondiwindi.

All content from Kiddle encyclopedia articles (including the article images and facts) can be freely used under Attribution-ShareAlike license, unless stated otherwise. Cite this article:
Inglewood, Queensland Facts for Kids. Kiddle Encyclopedia.