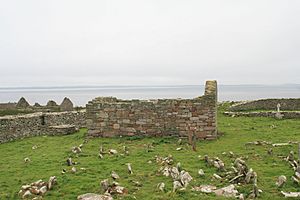 Teampall Molaise, the principal church of the monastery, as seen from the north with the mainland in the background.

There are remains of an early Irish monastic settlement. Laisrén (Saint Molaise) Mac Decláin reputedly founded a monastery here in the 6th century. He was confessor of Saint Columba (Colmcille) after the Battle of Cúl Dreimhne on the mainland nearby. His feast day is 12 August.

The island's ecclesiastical settlement was attacked in 795 and again in 807 by the Vikings, and eventually the monks abandoned the island and it remained uninhabited until the first secular settlement, probably in the 12th century.

The enclosure wall is impressive - reaching 4.5 metres (15 ft) in height at its highest point and up to 3 metres (9.8 ft) thick. The site contains various ecclesiastical buildings including enclosures, a stone-roofed oratory, two churches, a clochán, a large beehive-shaped cell, a holy well and other remains including cross slabs suggesting foreign influences. The whole complex is composed of what is probably local sandstone rubble.

The local population peaked at just over 100 in the 1880s but the last residents moved out to the mainland on 12 November 1948. Some of the buildings are still visible including 15 houses and the island's school. The site remained a pilgrimage destination right up to recent times. In 2018, the Marine Survey Office of the Department of Transport, Tourism and Sport caused controversy when it banned commercial operators from landing visitors on the island, due "to concerns for safety during embarking and disembarking".

All content from Kiddle encyclopedia articles (including the article images and facts) can be freely used under Attribution-ShareAlike license, unless stated otherwise. Cite this article:
Inishmurray Facts for Kids. Kiddle Encyclopedia.