The International Building and its wings were built as part of the construction of the Rockefeller Center, and an oval-shaped retail building was originally planned for the adjacent block to the south, between 49th and 50th Streets. The oval building was scrapped in early 1931, and an updated plan proposed a tall 41-story tower and two smaller 6-story retail buildings on the site of the oval building. As American tenants were reluctant to rent in these retail buildings, Rockefeller Center's manager Hugh Robertson, formerly of Todd, Robertson and Todd, suggested foreign tenants for the buildings. Because the canceled oval building had contained rooftop gardens, Raymond Hood suggested the idea for rooftop gardens across the complex, including on all of the retail buildings. These gardens would be curated by Ralph Hancock.

Two themed buildings on the adjacent block, the British Empire Building and La Maison Francaise, were respectively leased by Britain and France. A department store and 30-story building (later changed to 45 stories) was planned for the site of the current International Building, between 50th and 51st Streets, with the department store portion facing Fifth Avenue. The International Building plan was modified to its current status in June 1932, when plans for the department store were replaced with two proposed retail wings, which would be nearly identical to the twin retail buildings to their south. The two new retail buildings, connected to each other and to the main tower with a galleria, were proposed to serve Italian and possibly also German interests upon completion.

In May 1934, plans were officially filed for the remaining two International-themed buildings, as well as a larger 38-story, 512-foot (156 m) "International Building" at 45 Rockefeller Center. Work on the buildings started in September 1934. The final small building would have been rented by Germany under the name "Deutsches Haus", but Rockefeller ruled this out in 1934 after being advised of Adolf Hitler's Nazi march toward World War II. Russia had also entered into negotiations to lease the final building in 1934, but by 1935, the building's occupancy was unclear as the Russians were no longer actively seeking a lease. With no definite tenant for the northernmost building, the Rockefeller Center's managers reduced the proposed nine-story buildings to six stories, enlarged and realigned the main building from a north-south to a west-east axis, and replaced the proposed galleria between the two retail buildings with an expansion of the International Building's lobby. The empty office site thus became "International Building North", rented by various international tenants.

In April 1935, developers opened the building. A record 136 days had elapsed from groundbreaking to completion. The internationally-themed complex was seen as a symbol of solidarity during the interwar period, when Italy's entry in the League of Nations was obstructed by American isolationists.

The New York City Landmarks Preservation Commission added landmark status to the exteriors of all the original Rockefeller Center's buildings in 1985. The first-floor interior of the International Building was also designated at the same time. In its approval of the complex's status, the commission wrote, "Rockefeller Center ranks among the grandest architectural projects ever undertaken in the United States". The roof gardens of the wings were restored in 1986 for $48,000 each. The complex became a National Historic Landmark in 1987. 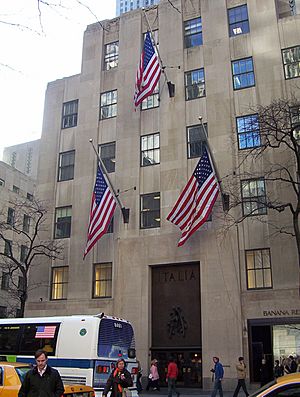 The 512-foot (156 m) International Building has the address 630 Fifth Avenue to its east, or 45 Rockefeller Plaza to its west. The tower stands at 41 stories high, including mechanical floors. It was recessed as far back from Fifth Avenue as possible so as to maximize rental space while still complying with the 1916 Zoning Resolution, which mandated that buildings of a certain height needed architectural recessions depending on how far the building's wall was from the street. One of two skyscrapers that opened in Manhattan in 1935, it was noted for its short 136-day duration of construction, as well as the construction quality, overall design, and materials used.

The building, located in the middle of the block between Rockefeller Plaza and Fifth Avenue, contains a central plaza on its east, facing the Fifth Avenue entrance. The Fifth Avenue entrance leads to the four-story-high lobby. There are three glass-and-nickel bronze revolving doors underneath a sign that spells "FIFTH AVENUE" in nickel bronze capital letters. Three-story-high windows, surrounded by marble, are located above the doors. These windows can be used to hold exhibitions.

The International Building's lobby was inspired by the triangular-shaped lobby of the Chrysler Building and the chapel-like lobby of the Empire State Building. As the International Building was not as big as 30 Rockefeller Plaza, the tower's architects designed the lobby so that it created an illusion of grandeur. The lobby is bedecked with "rich, elegant materials", including veined green marble stretching the entire height of the wall; nickel bronze moldings at the top of the green marble columns, and copper leaf on the ceiling. Elevators ascend to an upper mezzanine and descend to the complex's underground mall, highlighting movement. These escalators also have nickel bronze gilding. Three-story-high hallways stretch to the north and south of the lobby, leading to Palazzo d'Italia and International Building North. The mezzanine also has green marble walls, as well as corridors to the north and south leading to the annexes.

The passenger elevators are placed in a central core, ringed by a rectangular corridor on each floor. The ground level has a similar footprint to the office levels above it, except that the ground level contains stores instead of office space. The lobby contains large windows that were originally intended for exhibitions, but no showrooms were ever installed. Marble piers, topped with nickel bronze moldings, surround the green-marble walls of the elevator bank.

Offices surround the corridors on each of the levels above the mezzanine. The complex's original architect, Raymond Hood, ensured that all of the offices in the entire complex be a maximum of 27 feet (8.2 m) from a window since that was the maximum distance that sunlight could permeate the windows of a building at New York City's latitude.

The more southerly of the two wings is Palazzo d'Italia (literally the Italian Palace) at 626 Fifth Avenue. The limestone-clad building contains retail space on the first floor, separated from the offices above it by an exterior cornice, as well as setbacks on the sixth floor. It is attached to the International Building at its northwest corner. The Italian leader Benito Mussolini was impressed by the building's original 9-story height, which beat the 6-story height of the French and British Buildings, although the two new wings were later scaled down to six stories as well.

The International Building North, at 636 Fifth Avenue, is the identical twin of Palazzo d'Italia and the more northerly of the main building's two wings, being attached to the main building at its southwest corner. The International Building North, like its twin, contains a rooftop garden, a first-floor cornice, and a sixth-floor setback. The building also contains a themed rooftop garden on the eastern half of the roof. 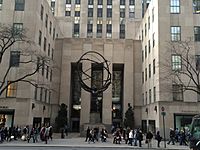 The main plaza with the Atlas statue 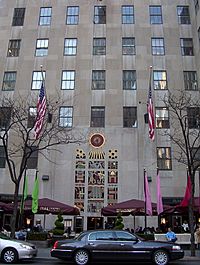 Lee Lawrie's 15-foot-high (4.6 m), 14,000-pound (6,400 kg) bronze Atlas statue stands in the center of the building's central plaza. Behind the Atlas statue is the tower's entrance, which consists of four doors under another of Lawrie's works: a limestone screen depicting the history of international relations. Artwork in the lobby includes Michio Ihara's "metallic structures", installed in 1978, and Paul Fjelde's "bronze bust of Charles Lindbergh", installed in 1975. The side entrances on 50th and 51st Streets also contain limestone reliefs created by Lawrie. The reliefs above the 50th Street entrance depict international cooperation, while the relief on the 51st Street entrance contains fourteen fictional shields of heraldry. A back entrance contains two limestone reliefs by Gaston Lachaise, which honor the workers who built the complex. This back entrance was later modified to reflect Isamu Noguchi's design of the Associated Press Building entrance, located directly behind the International Building.

In 1965, the original Piccirilli work above the entrance was replaced by Italia, Giacomo Manzù's bronze relief depicting fruits. Manzù also created The Immigrant, a depiction of a penurious mother and child, located below Italia. Unlike the other retail buildings' three-glass-door entrances, the palazzo only contains two bronze doors at its entrance. The entrance cartouche originally depicted the Crown of Savoy and a Fascist symbol, but these too were removed in 1941, never to be replaced. Also modified during the war were Leo Lentelli's limestone bas-reliefs on the cornice, which depicted four periods of Italian history. Lee Lawrie's work were the only original artworks on the Palazzo d'Italia's exterior that were not modified during the war. Lawrie had created Saint Francis of Assisi with Birds, a bas-relief atop the 50th Street entrance, which depicts Francis of Assisi with a halo of golden birds around his head.

Because it was not originally built for a specific country, the International Building North contains generic works related to international cooperation. Lentelli created four bas-reliefs above the sixth story windows, signifying Africa, Asia, Europe, and the Americas. Piccirilli's cartouche above the entrance, signifying a male and female holding tools and separated by the god Mercury, was intended with a similar theme, but instead ended up having a slightly fascist effect. Piccirilli also designed the opaque "Poetic Glass" screen above the entrance, symbolizing a youth's involvement in world affairs. Lawrie designed a bas-relief for the 51st Street entrance, with a woman and horn being an allegory for world cooperation.

All content from Kiddle encyclopedia articles (including the article images and facts) can be freely used under Attribution-ShareAlike license, unless stated otherwise. Cite this article:
International Building (Rockefeller Center) Facts for Kids. Kiddle Encyclopedia.